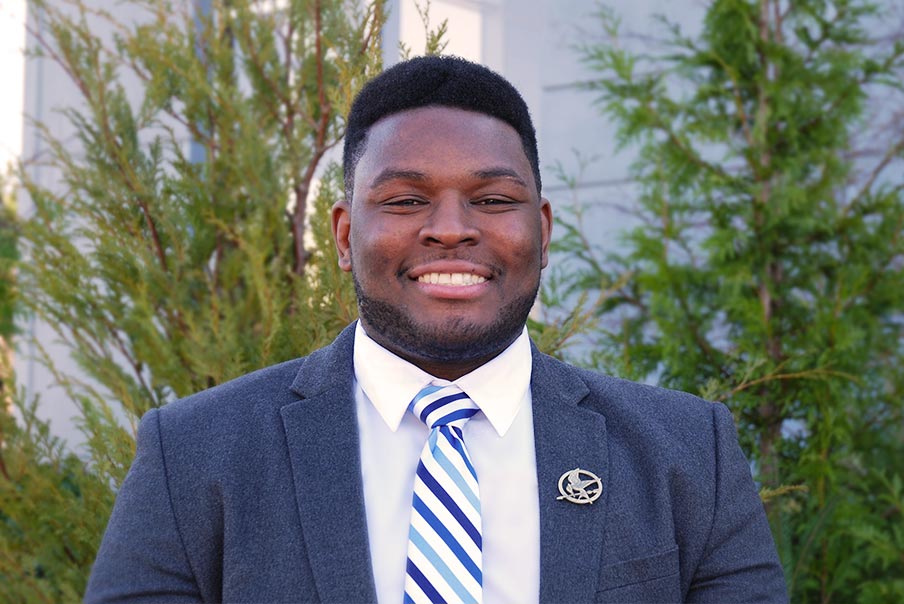 At 6 feet tall and 235 pounds, Xavier L. Henderson is a presence. Rather than intimidating, though, his warm smile and effusive personality welcome you in.

Wearing chino pants and a blue blazer, Henderson is packed into his clothes, looking every bit the heavyweight wrestler. Wrestling, says the 26-year-old Highline College student, changed his life.

“Wrestling has been the biggest thing for me,” says Henderson. “It’s what brought me to Highline. It’s what has changed me.”

Wrestling was a sport he discovered during a difficult time in his life.

“I went to a few high schools in Tacoma, but got kicked out for fighting and other undesirable things. I was a knucklehead,” says Henderson. “I had a 1.3 GPA. School just wasn’t for me, not at that moment in my life.”

To escape their situation, Henderson and his best friend opted for the U.S. Army. His friend was accepted. Henderson was rejected for being too heavy. At 320 pounds, there was no way he could run the required two miles in 18 minutes. He could barely walk even one mile without being out of breath.

With the Army option out of reach, Henderson was still determined to change his life. He knew he needed to lose weight and began working out at a local gym.

“I met a man named Calvin Horton and he was an MMA [mixed martial arts] fighter. He convinced me that I still had something to fight for. He told me I could do it,” says Henderson.

Spurred on by his new mentor, Henderson began competing in MMA matches. Soon he had won seven fights in a row. His last match was against a wrestler.

“We’d be trading punches and the wrestler would take me down. I’d stand back up and he’d take me down again,” says Henderson. “He won by using his wrestling skills and that upset me. It motivated me to learn how to wrestle so it wouldn’t happen again.”

He worked with a couple of wrestling coaches and kept improving. During a practice, one fellow wrestler saw Henderson’s talent. He encouraged him to improve his skills even more by competing against the higher caliber talent he would find in a college program. He recommended Highline College.

“That’s when I met the wrestling coach, Scott Norton, and he said I was too heavy, that I didn’t even meet the 285-pound limit,” says Henderson. “He told me that I had to lose at least 35 pounds to be on the team. And I knew that in order to get into a college, I needed to earn a GED.”

Henderson had dropped out of high school in 2007. Back then, school was not a good fit for him, and neither was his home life.

Henderson was adopted at age 4 with his two younger sisters. Prior to adoption, his family lacked stability. Both birth parents had been drug abusers.

While his new home was stable, by the time he reached his teen years, Henderson felt his adopted parents crowded him and tried scaring him into the behavior they were looking for. The tactic backfired.

“It made me rebel,” he says. His father was a military man and created a regimented environment for his family. While some children may have thrived with that kind of structure, Henderson did not.

“I wanted to do what I wanted to do,” he says. That didn’t work in his father’s house. His father told him to leave. He was 17 years old.

He and his cousin rented an apartment together and worked low-wage jobs. Henderson was 18 when they lost the apartment, prompting him to couch surf at friends’ houses, some of whom would let him stay for a year or more.

There were times when he did not have anywhere to go and slept outside. While he was helping out at one gym, he occasionally used it as a place to sleep. He would sneak into the gym after it closed.

“It was a humbling experience. The crazy part is, I’m very thankful for it, the struggle I had to go through in order to be where I am now,” he says. “I’m nowhere near where I want to be, but I’m seriously better than I was.”

Even with no stable roof over his head, Henderson was motivated to get onto Highline’s wrestling team. He had to earn his GED and lose weight.

“I decided to buy the book to study for the GED and train every day and study every night,” says Henderson. “It had to be one of the best days of my life, September 20, 2012, when I received my GED.”

While studying, he was a dedicated gym rat.

“I worked out for eight months every day, three times a day. Waking up at 6 a.m., sleeping at 9 p.m. Watching everything I’m eating. It gave me the idea of hard work and dedicating myself to a goal,” he says.

He had conquered what some thought might be impossible: he lost 112 pounds and earned his GED. All of his hard work paid off and he earned a spot on Highline’s wrestling roster at the 197-pound weight class.

Henderson didn’t know anything about Highline beyond its wrestling program, but once he started taking classes in September 2013, he began meeting faculty and staff who impacted and inspired him, including Darryl Brice, Tracy Brigham, Teela Foxworth, Susan Landgraf, Laura Manning, Woody Moses and Elizabeth Word. Meeting them “convinced me that this is the place I need to stay. These people are so nice. They want to see me graduate. They want to see me do well. They believe in me and helped me believe in myself.

“The wrestling brought me to Highline, but the education is what kept me. It kept me going. The instructors are passionate about what they do. I feel they really want me to succeed. It made me fall in love with this college.”

Henderson thrived his first year at Highline. He wrestled on Highline’s team and earned a 3.2 GPA. Yet, he still was without a permanent place to call home and became discouraged. He was finding the instability of his living situation increasingly difficult.

Elizabeth Word, who has been especially influential for Henderson, encouraged him not to give up.

“At one point, I wasn’t going to come back to school, but she was the one who kept me believing in myself,” he says. “She told me, ‘Don’t give up.’ We all tend to stop believing in ourselves, no matter how mentally tough we are. Sometimes you can be derailed. Ms. Liz knew that students who drop out tend not to come back, so she kept on me to stay with it.”

Because Henderson had thought he would drop out of college, he hadn’t applied for financial aid, a process that must be done weeks ahead of the quarter. Word introduced Henderson to Rod Stephenson, who heads up Highline’s Foundation. Because of Henderson’s academic achievements, Stephenson told him he qualified for a scholarship, which would keep him in school.

Henderson’s story of being a high school dropout and struggling with homelessness would later bring him additional scholarships. His story was not one he widely shared with others before, but in telling it, he learned that it could be of help to others. He now wants to motivate others to seek their full potential.

In a scholarship application, Henderson wrote that he “thought that being homeless would be hindering, but being at Highline has taught me that I can overcome any barrier in life. My reformed philosophy on life is that if your desire to succeed is greater than your fear of failure, then anything is possible for one who believes.”

Henderson recently signed a lease to an apartment. He is the first in his biological family to go to college. His gratitude for the opportunity and the new trajectory in his life is clearly evident.

“I’m just so thankful. I can’t say it enough. I’m still shocked by all of the support.”

Henderson did not wrestle for Highline’s team this year due to an injury he suffered during a wrestling clinic over the summer.

“It happens, it’s just life. When things knock you down, you just got to get back up no matter what,” says Henderson, who found an unexpected benefit from being sidelined for the season. “Not being able to wrestle actually helped me out because I was able to take a journalism class, which showed me how much I like journalism,” he says.

Still passionate for the sport, he reported on the team for Highline’s student newspaper, The Thunderword. But he is quick to note the importance of wrestling in his life.

“Wrestling has been what’s developed me into a hardworking young man. It’s the resilience of wrestling that’s got me to where I am now.”

Henderson will graduate with his associate degree with an emphasis in communications from Highline in June. In the fall, he will begin studying broadcasting and journalism at Washington State University in Pullman where he plans to wrestle. His goal is to win a national title.

“My passion is communicating. I love people and connecting with them.”