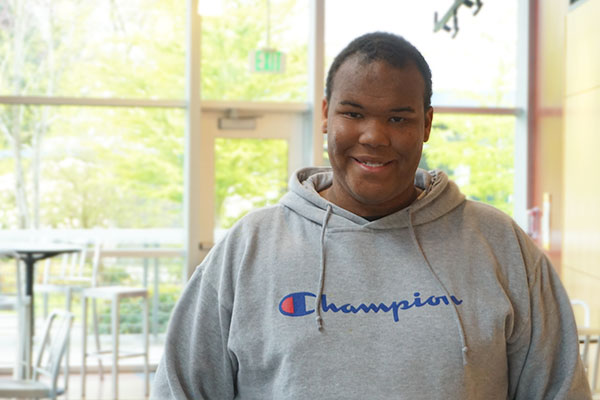 Passion for photography leads to publications in college, local newspapers.

For as long as he can remember, Stephen Glover, 20, has had a passion for photography.

On any given day, you’re likely to find him taking photos at Highline College events, documenting student life in the Highline Student Union building or at a sports game, taking action shots.

“All my life, it’s just photography and art,” the Kent resident said.

Glover joined Highline College in fall 2018 as an Achieve student and plans to complete his program in June 2020. Achieve is a post-secondary program for students with intellectual disabilities. The program offers credit and non-credit classes, intensive advising, involvement in campus life, community-based internships and assistance with job placement.

Since Glover began at Highline, he’s taken courses through the program as well as college-level courses, such as multimedia design. And he even became part of #HorrorLife, a former club for students who appreciate horror movies and films. But Glover’s mostly gotten involved by taking photos for the Thunderword, Highline’s student-run college newspaper.

“I do want to become a professional photographer, which I already am,” Glover said, adding that he’s not sure how much further he’ll go with that endeavor.

For now, however, he’s grateful to have his work published in not only the Thunderword but also Westside Seattle, a local newspaper with a focus on West Seattle, the Highline area and Ballard. Glover said Achieve helped him with an internship at Westside Seattle, in which he has photographed a Ballard High School dance competition, students playing in the snow at Highline College and a Seattle skyline scene, among other shots.

Glover isn’t only into photography, however. He says he’s been creative all of his life and enjoys sketching, creating videos and going on YouTube.

Although Glover has had to grapple with “emotional stuff” sometimes, he tries to keep a positive attitude.

“I’m always a friendly guy so I like making new friends,” he said. “Even if people don’t accept me, I’ll just have to learn to accept that, so I do.”

Glover said he has strong family support and always tries to follow the advice his grandma has given him: “Don’t let people stop you from doing what you love.”