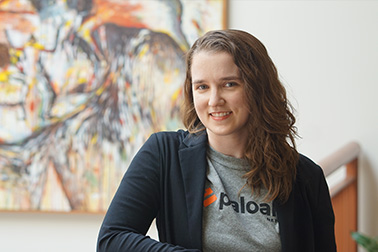 Changing careers after years of work can be a trying process.

There’s the logistics of how, when and where. The emotional aspect of whether a person can even make the change. And then there’s the time and energy it takes to prepare for a new career before one is even hired or knows for certain if they will like it.

But, for those who take the risk, the rewards can be profound.

That’s exactly what Meghan Koester, 34, did when she left her longtime career as a teacher who taught English and decided to pursue a career in cybersecurity.

Koester found herself at a crossroads in her career in the spring of 2020 when the COVID-19 pandemic hit. She had been interviewing for jobs in Hong Kong, Taiwan and the United Arab Emirates when those prospects were suddenly halted as travel to foreign countries came to a standstill and countries went into lockdown.

“I was looking into what can I retrain into that I can potentially do remotely if we end up being remote over time, and cybersecurity, I thought, was that answer,” Koester said, adding that she also appreciated the challenge of learning all there is to know about the field.

At the time, cyber-attacks were making the news. Whether it was stories of ransomware, computer viruses or the Washington state unemployment-claim hack that stole $600 million, it was clear to Koester that cybersecurity professionals were and are in demand.

Having already earned her bachelor’s in English and master’s degree in education years prior, Koester enrolled at Highline College to earn a Bachelor of Applied Science degree in Cybersecurity and Forensics.

She plans to graduate in the summer of 2022 with not only a new degree but a highly sought-after career as well. Koester recently signed a contract with Palo Alto Networks, a premier cybersecurity company that works with Fortune 100 and Fortune 500 companies, after winning the company’s highly-competitive Secure the Future competition earlier this academic year.

“There were a lot of different emotions,” Koester said when asked how she felt about getting the job after winning the competition. “I was just so excited and happy for this opportunity… They were the first to develop the Next-Generation Firewall. They’re a pretty big deal.”

Winning the competition, which included a $10,000 cash prize, was no easy feat, however.

College faculty first had to nominate Koester. She then had to choose to take a test with 80% passing or earn a Palo Alto Networks Certified Entry Level Cybersecurity Technician certification. Koester opted for the certification and joined the top 150 students in advancing to the next phase. She then went on to complete a series of rounds, which included learning modules and multiple essays. She again advanced to the next phase, which included a longer essay and a presentation. After the third round, 10 finalists were chosen. Koester said the last phase was another presentation with an intense interview process but her skills and background in teaching came in handy.

“The question and answer portion was what I was most nervous about but I’m used to random questions because you never know what they’re gonna ask,” she said, adding that she worked to organize information succinctly and injected humor into her presentation when and where she could.

In addition to winning the Palo Alto Networks competition, Koester has participated and ranked well in a number of other cybersecurity competitions with her teammates in the Cyber Competition Club, a student-led club she started in spring 2021. She’s most proud of winning top 6% in the National Cyber League, which has thousands of competitors, and their placement of 15th out of 135 colleges and universities in the Department of Energy’s CyberForce competition. In that competition, Highline College was the top-placing college. The club has also competed in many Capture the Flag competitions and the Pacific Rim Collegiate Cyber Defense Competition (PRCCDC).

For those who are interested in competing in cybersecurity competitions, Koester advises students to “go for it.”

“My first cybersecurity competition, I’m not sure I got my team any points,” she said. “That doesn’t matter. I knew more at the end of that competition than at the start of it.

Learn more about Highline’s BAS in Cybersecurity and Forensics.