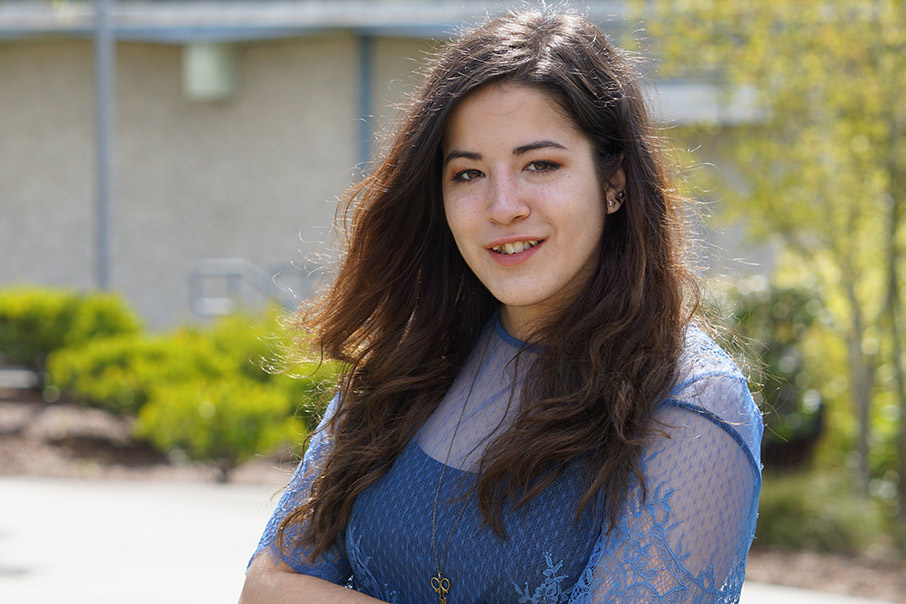 Reporting her way to the top

Izzy Anderson, editor of The Thunderword, looks to future in journalism.

High school was hard for Izzy Anderson. She didn’t feel like she learned much or was working toward any goals, let alone her education.

But her enrollment in Running Start at Highline College her senior year changed all of that.

“After taking some classes, I realized college was absolutely nothing like high school,” Anderson said. “I felt like I was learning and learning things that both interested and challenged me.”

Fast forward two years and the Federal Way resident is now preparing to finish her last 16 credits of her associate degree before moving on to a four-year university. There, she hopes to pursue a bachelor’s degree in interactive media design or journalism.

Anderson solidified her interest in media and journalism through working at Highline’s student newspaper, The Thunderword. As arts editor, Anderson moved up the chain of command fairly quickly after several editors of the paper graduated. Within two quarters, she was editor-in-chief.

“I was definitely intimidated at first, but I’m really grateful for the position,” she said. “It’s shown me how to appropriately head a project in a leader role — Gene and T.M. (our advisers) always say that working for the newspaper here is like one long, crazy, group project, and it’s true!”

Dr. T.M. Sell has worked at Highline College as a journalism and political science professor since 1986. Gene Achziger also teaches journalism as a part-time faculty member.

“Of course, aside from managing the newsroom, this position has also let me talk to many people through stories,” Anderson added. “I’ve met all kinds of people I wouldn’t otherwise have had the opportunity to meet or know had I not had this job. It keeps the job interesting and new every day.”

Anderson recommends students join The Thunderword not just because of the valuable skills the job teaches, such as meeting deadlines and how to work well with others, but because of the friendships one may develop with the newsroom team.

“Your coworkers and advisers are friends, not just people you work with every day,” she said. “You develop a lot of inside jokes when you spend every weekday with someone.”

Upon finishing school, Anderson plans to make a living doing what she loves, pursuing journalism and media.

Before that, however, she’ll finish her last quarter with funds from a Highline College Foundation scholarship for a five-credit course.

“Of course I’m excited to see where life takes me next, but I’ve truly enjoyed my time at Highline and as part of the Thunder staff,” she said. “You become like a family here.”