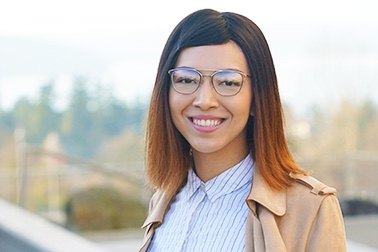 From Business to Cybersecurity

When Sarah Conrad first joined Highline’s Cybersecurity and Forensics bachelor’s degree program in 2017, she says she was one of the only women.

The former Running Start student had already earned her associate degree in business, but her little knowledge of computers coupled with her anxiety around being in a male-dominated learning environment, made it hard to connect with her peers.

In fact, she didn’t begin to feel comfortable in her chosen field of study until a former computer science instructor took a special interest in her, about a year into her degree.

Colleen Day encouraged Conrad to get out of her comfort zone and join a cybersecurity competition.

“When this instructor noticed me and showed me that she believed in me and pushed me, that allowed me the confidence to try something new,” Conrad said of Day. “And that competition was the first time I started talking to my peers and getting involved with school.”

That competition was the 2018 Department of Energy’s CyberForce Competition. Despite Highline having never competed in the national competition, Conrad worked with her team to earn 10th place.

“Having those experiences at competitions where you’re able to really use the skills you learn in the classroom in a hand-on environment, that really helps you better visualize ‘OK, this is what the career is like out there and this is how I can actually use these skills,’” she said. “It really helps you see the bigger picture when you’re able to participate in these things.”

Conrad went on to participate in the 2019 Department of Energy CyberForce Competition and, most recently, the California-based Palo Alto Networks Academy – Secure the Future Competition. That competition required participants to begin researching security vulnerabilities in September 2019 with a final presentation from the top 10 participants in January 2020.

Competing against students with master’s degrees from four-year universities, Conrad took home second place, which included $5,000 and the opportunity to interview for internships and full-time positions. And, once again, Conrad was the only woman to place in the top 10, let alone the top three.

Although her graduating cohort (June 2020) has grown to include four other women studying cybersecurity and forensics, Conrad said the program is still a male majority. Luckily, she says she’s been able to find support from Women in Cybersecurity or WiCys, a club on campus where women in the program meet and share resources, talk about different events on campus and empower each other.

Now, as Conrad looks forward to graduating in June 2020, it’s clear there’s been a shift.

Not only is she involved in competitions and clubs, and has a deeper connection to her major, but Conrad is also employed as an IT technician, providing technical support in a Computer Information Systems lab. Quarterly, she gives a presentation to new students entering the cybersecurity program about what resources are available to them and tips on how they can succeed in the program.

“I would like to continue those presentations even after I’ve graduated from Highline because I think it’s really helpful that when a student has been through the program and found success, is able to share their advice and experience with other students,” she said.

Conrad plans to begin work as a security analyst for the City of Tacoma in mid-March 2020, a position that will no doubt allow her endless opportunities to keep learning.

“I’ve always enjoyed learning something new and with cybersecurity or any technology field, you’re going to have that,” she said. “Technology is always changing so there’s always something new that you can learn.”

Learn more about the Bachelor of Applied Science degree in Cybersecurity and Forensics.