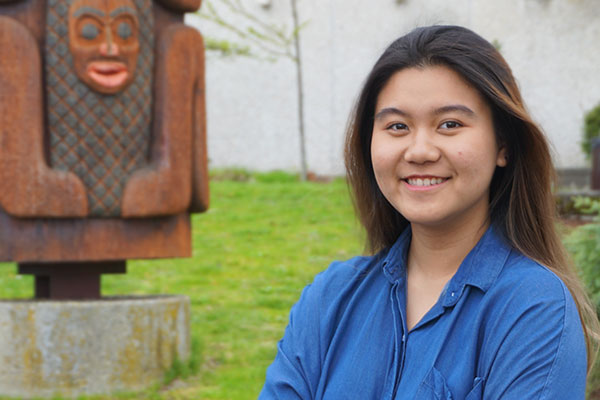 At age 16, Helen Pham left her home in Vietnam to travel across the world for her education.

At first, she didn’t know what she would study or which college she would go to, but knew she had family in SeaTac, Washington who could help her navigate the educational system as an international student.

During spring 2019, Pham was nominated for the Student Employee of the Year and Student Legacy Leader awards, two awards that recognize students and student workers for going above and beyond.

“There’s a lot of things I’ve learned in two years,” Pham said. “I’ve grown a lot more. I was only 16 when I got here, but after two years now, I’m 18. I feel a lot more independent. I can do anything in this world by myself.”

Pham said it was, at first, hard to adapt and make friends as an international student at Highline. Changing classes every quarter meant every new person she met was gone after two-to-three months.

But she eventually found her crowd after volunteering in extra-curricular activities. She befriended members of the Global Student Ambassadors (formerly known as the International Leadership Student Consultants or ILSC) and started helping out with their annual winter dance and Global Fest events. She helped put up decorations, promoted the events, directed a choreography skit for Global Fest and volunteered in any way she could.

Pham also started working for Highline’s Advising and High School Programs as a student navigator. She said she helps new students with their starting point at Highline by connecting them to admission orientations and WayFinders Workshops, information sessions for new and prospective students.

“I work with a lot of people from many different backgrounds all around campus and I really love the job,” she said. “As I help more people, I feel like I love it more and more.”

Pham said she has empathy for the students she works with in Advising and High School Programs because she remembers what it felt like to be a new student herself.

In fact, Pham didn’t figure out what she wanted to study at Highline until she had been at the college for one year. She said talking to an adviser earlier on would have been helpful.

“After around winter quarter last year, I found out what I needed to do [for classes] and I worked with my class adviser on that,” she said. “So, things began to get on track and everything is pretty good for me now. But I wish I knew that working with advisers really helps with deciding what classes to take.”

Eventually Pham chose to pursue graphic design and hopes to transfer to California’s Fashion Institute of Design and Merchandising (FIDM) in spring 2020. She said she’s torn between continuing to study graphic design and digital arts so she can one day become a children’s book illustrator, or instead majoring in visual communications to become retail display designer.

“I just wish to learn new things and improve the way I think about design and my ideas and creativity for design,” Pham said.

But, until then, Pham said she’s grateful to feel valued as a Highline student in such a diverse community.

“Since we are very diverse here, everybody respects different cultures and backgrounds, so I feel like I’m very welcome here,” she said. “It makes it a lot better –– positive vibes –– when you feel good, relaxed and welcome, you feel better and you’re better at adapting to the new environment.”

Learn more about being an international student.