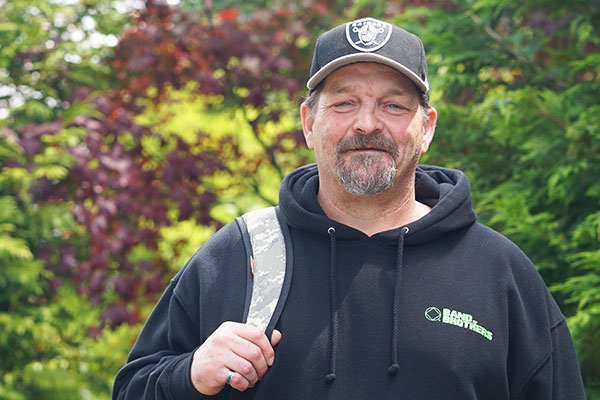 When Mark Isaksson first enrolled at Highline College, he expected instructors to teach, but found they did much more.

“That’s what makes Highline, at least for me, so special,” he said. “The people who work here invest in your life and they don’t get bonuses for that.”

Isaksson recalls getting to his very first Highline College class early. It was an 8 a.m. English 101 course in fall 2018 and he was the third person there.

But he said his English instructor, Ariel Wetzel, wanted nothing more than for him to succeed.

“Where I come from, that’s not something I’m used to,” Isaksson said with emotion.

Isaksson would go on to not only earn a 4.0 in that class, but also earn it for all of his classes that quarter, and the quarter after that.

Prior to coming to Washington, Isaksson battled a long bout of substance abuse and addiction. He’s spent about a dozen years of his life incarcerated, whether it’s in prison or county jails, and his current sobriety isn’t his first time he’s been in recovery.

However, none of that has stopped him from starting over.

“I moved to Washington a little over two years ago with the sole purpose of getting back into recovery,” he said.

Isaksson enrolled in Seattle’s Union Gospel Mission’s recovery program in 2017 and graduated within one year. After that, he became an intern with the very recovery program that helped get him sober, and started studying for two associate degrees in chemical dependency and human services at Highline. He hopes to attain his chemical dependency AAS in winter 2020 and his human services AAS the following quarter in spring 2020.

To help him achieve his educational goals, Iskasson was awarded the Natasha Burrowes Equity and Inclusion Scholarship, a scholarship offered through Highline College’s Center for Leadership and Service, in June. The scholarship covers fees and tuition for Highline students who identify as low income, formerly incarcerated, single parents, transgender, or black or Latino males.

“Coming out of a lengthy substance abuse addiction myself, I really want to help others overcome that,” Isaksson said, adding that he frequently goes to a youth treatment facility to share his story with 14- to 18-year-old teenage boys who are going through treatment in lieu of spending time in jail. “It’s really rewarding.”

“I wished I’d known somebody like him much earlier in life,” Isaksson said. “Because it would have saved me a lot of heartache and just the thought of being able to do that for somebody else … that’s what led me in this direction.”

It’s clear UGM and Highline College have helped Isaksson in more ways than one. As a way to recognize Isaksson for his hard work in school, UGM arranged a special surprise for Isaksson back in April.

UGM told Isaksson to be at a graduation celebration for three men who completed the recovery program. Confused because he’d been out of the program for a year already, Isaksson went and was met with UGM’s 2019 Student of the Year award presented by Highline College President John Mosby.

“I mean … college presidents just don’t show up,” Isaksson said, noting that Highline College’s faculty and staff have consistently gone above and beyond to help him.

Isaksson also gave accolades to psychology instructor Sue Frantz for helping him with study habits and self-reflection and to Ken Pimpleton who teaches chemical dependency courses.

“It’s just inspirational, seeing him and his passion to give back to the students is more than enough motivation,” Isaksson said of Pimpleton. “He’s a friend, he’s my professor, a colleague in the field… and no man or woman in the chemical dependency field is an island unto themselves, so he’s already said to his whole entire class, ‘I hope over the years anytime you have a question, I’m here.’ You don’t get that.”

Although Isaksson still has a few quarters left, he said those who are thinking of going to college should “just try” and that there’s never going to be a perfect scenario.

“Like I said, the staff here will not let you fail if you ask for their help and seek their help,” he said.