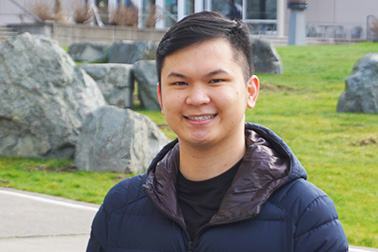 While living in Vietnam, Nguyen knew he wanted to study abroad as an international student. But he said going through the legal requirements, paperwork and application was challenging.

“In order to become an international student, you must convince the government that you are eligible to study abroad,” Nguyen, 26, said. “You would be surprised at how many times I tried to apply for the student VISA.”

It took him five tries to finally get approval. Yet, his persistence paid off.

“Although it was a time-consuming process, it is truly worth it,” the current Des Moines resident said, noting that he was finally able to start at Highline College in summer 2017.

That persistence carried Nguyen throughout his educational journey as he pursued his Bachelor of Applied Science degree in Respiratory Care, which he earned in winter 2022.

Nguyen said he chose to practice medicine because of a personal experience he had when he was younger.

“When I was in high school, I, unfortunately, got a severe respiratory disease which greatly impaired my breathing,” he recalled. “The terrifying experience made me realize how precious life is and I am very grateful to have a second chance in life.”

Although Nguyen initially wanted to study nursing, he struggled to get accepted to the program after numerous attempts.

“My family often says to me, ‘you don’t choose your career; your career will eventually find you,’” he said. “Honestly, I had found it difficult to believe until it happened to me.”

Nguyen said he had a great conversation with his advisor and learned about Highline’s Respiratory Care program, which he had never heard of prior to the conversation. Then, to his surprise, he was accepted right away.

Not only is respiratory care still within the medical field as he had once dreamed of finding work in, but this specialty focuses on treating patients with respiratory diseases like the one Nguyen experienced, making it a perfect fit.

This recent alum is now studying for his national board exam and has plans to work at St. Joseph Tacoma Hospital after receiving an offer to work there.

“They have a family-oriented working environment where everyone helps each other,” he said. “St. Joseph is a trauma center that highly requires critical care. This would train me to become the skilled therapist that I want to be.”

One day he hopes to eventually return to school to pursue his master’s degree to become a physician’s assistant that specializes in respiratory care. He said this will allow him to take part in certain procedures and treatments.

Until then, Nguyen advises current students at Highline to not be afraid to take on new challenges, to find a good group of friends who share the same goals and when a student starts to doubt his or herself, Nguyen recommends thinking about past achievements and to remain positive.

“Highline not only made my dream come true but also taught me valuable skills and lessons that will be helpful for my career,” Nguyen said. “…I have seen how Highline takes care of students who have struggles and treats them with respect. As one of those students, I truly appreciate the help and I would love to carry on that mission in my workplace where I can help those in need.”