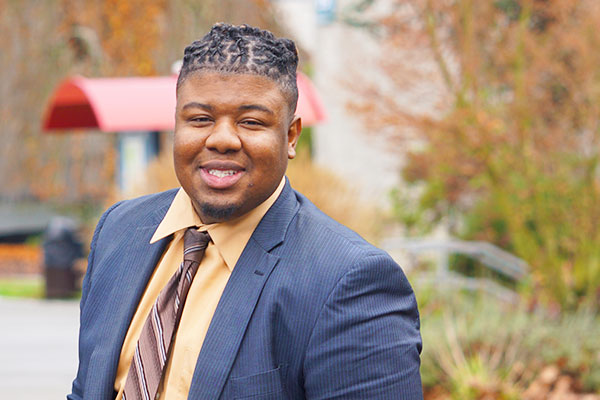 Alum reflects on how Highline College helped him follow his dreams.

If you asked alum Josias Jean-Pierre years ago what he wanted to be when he was growing up, he’d have told you “a motivational speaker, author and someone who travels and empowers youth of color.”

Not only is he fulfilling his childhood dreams, but, he says, Highline College helped get him there.

“I was working as a student ambassador where I found myself see my dreams come into play,” he said.

As a student ambassador, Jean-Pierre would travel throughout King County, Seattle and Tacoma to schools, sharing his story.

“Being an ambassador at Highline, it gave me a bigger passion to really run after it and, without that drive … I don’t think I’d be where I’m at today,” he said.

That position also allowed him to “really see what’s going on in the education system and see the hardships in education, when it comes to youth of color, in our students and faculty,” he said.

Jean-Pierre graduated from Highline College in 2013 after studying communications. From there, he went on to Northwest University in Kirkland and became a published author with the release of “The Power of Your Words.”

He’s now working on his second book, “What Is Your Why?”

But this author doesn’t sit behind his keyboard and hope for change.

He actively pursues it by traveling to regional and statewide conferences to help provide youth professional development and empowerment. It’s so that he can help “kids who look like him” to understand they can become better and don’t have to repeat the struggles that they’re going through.

Jean-Pierre said he was motivated to stay in college because he wanted to break what he refers to as a “curse.”

“I always say it’s not your fault that you’re born into the condition you were born in but it’s your fault for choosing to repeat it,” he said. “I wanted to break that legacy of my last name. I’ve seen my parents struggle, I’ve seen just the lack of resources … on their end and it motivated me to actually go ahead and say, ‘You know what? I’m a first-generation college student’ and to leave something else behind for my future family.”

While Jean-Pierre grew up in the Des Moines/SeaTac area of Washington state, he was born in Haiti. Now, at 25, he lives in Federal Way.

Choosing to attend Highline College was not only an easy choice because of finances and location, but also because he was exposed to the college through a past conference called Students of Color Opportunity to Reach Excellence or SCORE. He also participated in poetry slams that were held Thursday evenings at the college.

Once he got to Highline, he credits two instructors for his academic career — Dr. Darryl Brice and Ed Morris, both of whom are black.

“From the K–12 system, I never seen someone who looks like me until Rashad came in,” Jean-Pierre said of Director of Community Engagement Rashad Norris, who visits area schools as part of his work. “Rashad’s been my mentor since eighth grade but I never seen a teacher who looked like me.”

Jean-Pierre said for a long time he thought it was illegal for folks of color to be teachers because he never saw it.

“When I came to campus, I was kind of shocked,” he said of meeting Brice and Morris. “I was like, ‘Oh, it’s a black professor,’ you know? So, just seeing them being in that college level setting and being professors, it really gave me hope to understand if they did it, and look like me, I can do it, too.”

Jean-Pierre said he’s working toward his master’s degree as he works full time. But as an alum, he’s truly come full circle as he now has advice for current or prospective Highline College students.