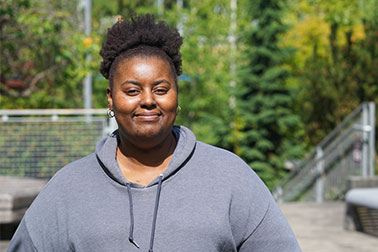 Student dreams of opening nonprofit to help others, give back.

From foster care to homelessness, Jannine Cornethan has had more than her fair share of heartache. But that hasn’t stopped her from pursuing her dreams of opening a nonprofit for at-risk youth one day.

Those goals include graduating with her associate degree in human services at the end of the fall quarter and immediately starting on her applied bachelor’s degree in youth development the winter quarter of 2020, also at Highline College.

Upon graduating with her bachelor’s degree, Cornethan plans to work in the human services field until she can open her own nonprofit with a mission to provide more access to afterschool activities for children who come from low-income families or the foster care system.

“I feel that if kids have more opportunities, it’ll keep them out of the streets, so that’s what I want to focus on,” Cornethan said, adding that her own life experience are a major factor in her desire to open such a nonprofit.

Originally from Seattle, the Redmond resident currently lives in transitional housing and keeps herself busy as a WorkFirst work-study student and employee. When she’s not at Highline, she’s likely driving her young teens to basketball tournaments or supporting her oldest, who recently began his first year at the University of Oregon on $118,000 in scholarships to study information technology.

“I’ve been in foster care, so I know what they have to go through –– the possibilities of what they can go through,” Cornethan said, referring to the children she hopes to one day help with her nonprofit. “So, I just want to help them get over some of those barriers that might be in place, and give them somebody they can relate to.”

Cornethan said her grandparents took care of her as a child because her parents just “couldn’t get it together” but some issues with that household remained. By the time she was 17, she had lived in foster care and back with her mother, but decided to venture out on her own when she was accepted to Washington State University.

“I went to WSU for a little bit, realized I didn’t really like on-campus life and came back to work a lot,” she said. “I went back to WSU to try to finish my degree, but ended up getting pregnant with my oldest son. So, I came back and really just took care of him and worked a lot.”

Cornethan said things were going OK until she met and moved in with a person who would end up abusing her. Finding herself in a domestic violence situation, the mother of four left any semblance of comfort she had in order to protect herself and her children. As they stayed with friends and family, Cornethan applied for transitional housing but was able to get an apartment before her spot on the waitlist opened.

“I think it was a little too soon though because I wasn’t as financially stable as I needed to be,” she said, referring to moving into the apartment. “That’s what led to the most recent situation of us being homeless. I was working but I had some medical issues that happened so I had to give that job up, which of course, if you can’t pay your rent, you’ve got to go.”

While her oldest stayed with friends, Cornethan and her younger children slept in their car. She said she tried staying at Mary’s Place in Burien and using Federal Way’s Day Center for services and, eventually, it was her turn on the transitional housing waitlist. It had already been two years since she first signed up.

“The fact that rent is rising, so many people are being put in unfortunate situations,” Cornethan said. “I’m grateful though because we’re cool now.”

During all of this, Cornethan had also been working with Washington State Department of Social and Health Services, which referred her to Highline’s career path services in summer 2018.

As part of the Women’s Programs and WorkFirst Services, Cornethan was able to get a job working part-time at the college and have her entire tuition paid for.

But she still needed money for basic necessities, like a vehicle for transportation, moving costs to the transitional housing and all that comes with raising teenagers. Taking a chance and telling her very personal story, Cornethan applied for and won both a local and regional Soroptimist International scholarship. The local one, supported by the Federal Way and South Seattle chapters, was for $2,000, and the regional was for $5,000.

“I was shocked and couldn’t believe that I had won, and to find out that I had won regionals was humbling,” Cornethan said. “I knew then that my journey would continue and I will succeed.”

Cornethan said she found out about the scholarships through Jean Munro, a program coordinator, adviser and retention specialist for Women’s Programs and WorkFirst Services. Initially, she wasn’t going to apply because she didn’t think she would win but now she’s certainly glad she did.

“I will forever be grateful to Women’s Programs and to Soroptimist as, due to them, I am able to continue and complete my dreams,” she said.