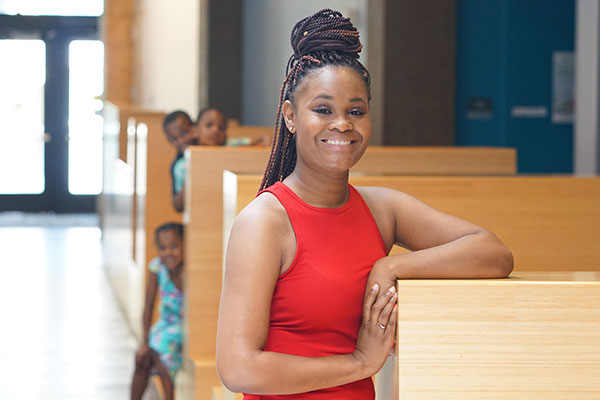 Patricia Williams-Seymore has known she loves children since her first job at a child care facility in eighth grade, but it wasn’t until she began teaching her own that she fell in love with a child’s love of learning.

“It brought warmth and joy to my heart to see my children love to learn,” the 27-year-old mother of two said. “I began to realize I wanted to teach but in a not so structured way, but a way to have fun and learn at the same time.”

The Renton-resident enrolled in Highline College’s Bachelor of Applied Science in Teaching and Early Learning program in September 2017 after obtaining her associate degree from Renton Technical College months earlier. Williams-Seymore would go on to graduate with her bachelor’s degree from Highline in June 2019.

While at Highline College, Williams-Seymore said her biggest struggle was believing in herself and keeping a positive mindset about starting college all over again.

“I was worried about how to juggle a full-time job, being a mother of two and a wife,” she said. “In the beginning it was hard, but, as time went on, I learned to balance it all out.”

She said Highline’s flexible night classes worked great with her schedule, allowing her to be able to work during the day.

Having influential instructors and accommodating advisers helped as well.

Williams-Seymore described her adviser Frank Kline, program manager for the Teaching and Early Learning BAS program, as someone who has been with her every step of the way on her educational journey.

“Any time I had concerns or confusion about anything, he was always there to help explain things to me,” she said. “He has always supported me and had encouraging words.”

As for an impactful instructor, Williams-Seymore said Elizabeth Hartmann, an instructor of her STEM Math & Science Methods course, had a way of teaching and background knowledge on math and science that was “flawless.”

“She met the needs of each person and worked with us closely on helping the students in our classroom,” Williams-Seymore said of Hartmann. “She modified homework assignments, encouraged us when some days were not our best and always came to class with a positive attitude and smile.”

At first, Williams-Seymore said she was overwhelmed with the amount of work she and her classmates had to do in Hartmann’s class, but she later learned to appreciate the time Hartmann put in to make sure each student was prepared for their first teaching job.

Now, Williams-Seymore has plans to start working with the Renton School District as a residency teacher for K-5th grades, all while pursuing her master’s degree. But she won’t forget her time at Highline.

“My favorite memory at Highline College was showing up for music class,” she recalled.

Williams-Seymore said before each class they would break out in a new clapping game, dance moves or songs from another culture.

“It reminded me of my own childhood –– singing and playing these games with my siblings and friends,” she said. “It was great to see my culture, and the things I enjoyed as a young child, be seen across the world.”

Learn more about our applied bachelor’s degree in teaching and early learning.