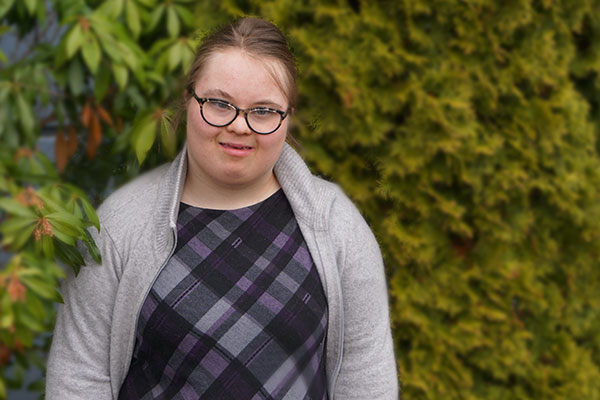 When you ask Helen Nash what her passion is she’s quick to say “inclusion.” When you ask her what her long-term career goals are, she promptly replies “to be president of the United States.”

It’s partially why she’s excited to rub elbows with elected officials in Washington, D.C. during an upcoming trip with Highline College’s Achieve program, where she was once a student, but is now an employee.

“I feel like I’m about to take action,” Nash, 21, said. “Like, literally. I’m going out there to take immediate action on an issue I care about versus when I was a student here. I did put out a speech but that’s all I did.”

Nash now works for Achieve as a communications specialist doing outreach for the program. During the Washington, D.C. trip, Nash and Achieve Director of Transition and Inclusive Education Julie Pollard plan to discuss higher education funding and programs, such as Achieve, with elected officials.

Nash, a Seattle resident, began at Highline College in 2016. She said she chose Highline because its mission and values of diversity, equity and inclusion align with her passion.

As a person with Down syndrome, Nash enrolled in the Achieve program, a fully inclusive comprehensive post-secondary transition program for students with intellectual disabilities. While it was up to her to ask for the accommodations she needed, she said she found support in the form of an adviser within the program.

“They’re there to help you with what you want,” Nash said of Achieve. “From campus life to getting your needs across in the classroom.”

Nash graduated from the program in June 2018 but not before making her mark at Highline.  In November 2017, Nash gave a speech during Disability Awareness Month about how her experiences in high school opened her eyes to how certain populations, such as those with disabilities or the LGBTQ+ community, can often feel isolated in places like schools.

“Inclusion for all, meaning disabilities, LGBTQ, race, religion, everything, immigrants, including them, everybody — every single one who has been excluded — I want to include them,” she said. “It’s important to me because I know what it’s felt like to be excluded.”

Nash said she didn’t consider herself to have a disability growing up.

“I thought I was a normal kid,” she said.

But when she got to middle school, her school district wanted to put her in special education courses — classes that were different from the ones her friends were taking. With help from her parents, Nash was able to stay in what she calls “mainstream” classrooms. From then on, she said she’s been “mainstreamed.”

During her senior year in high school, she realized some of the effects of students who weren’t “mainstreamed” when she met a boy, who would later become her boyfriend. The boy was going through special education courses and Nash found it frustrating that he had a different lunch schedule, different classes and overall felt separated from the rest of the student body.

Empowered, she spoke out about the issue at her school.

“The curriculum needs to fit the students, not the other way around,” she said.

Those experiences solidified Nash’s belief that the educational system should adopt integrated curriculums, something that Highline College employs a similar approach to.

Although there are certain courses Achieve students must take to receive their certificate of program completion, advisers meet with each individual to learn what their interests are to design class schedules that fit them.

“Students in Achieve have access to the same classes as any other Highline student,” Pollard said. “Students can take courses for full academic credit or with modifications in partnership with their faculty and Achieve advisers.”

“Achieve students benefit from the opportunity to learn, to think, form opinions and develop plans to contribute to their communities,” she said.

Nash said it’s important to share her own story, as well as others’, so that those who listen will begin to rethink their perspective on what it means to be a person with intellectual disabilities in society.

“It’s important to fight for inclusion for higher ed,” she said. “I’m hoping those stories will help people to rethink and vote for elected officials who support inclusion.”

In addition to going to Washington, D.C. to share her own and her peers’ experiences, Nash plans to begin a similar project at Highline College, too. Through interviewing Achieve students in short video clips and posting them to social media, she’ll share with the rest of the world the multitude of experiences, challenges, victories and stories of students with intellectual disabilities.

“When you hear stories of people who have been excluded,” Nash said, “and [the stories] just being out there, the more people are aware, and maybe they’ll start to see that we should include.”