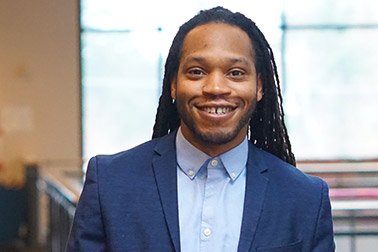 Before returning to college in 2018, Highline College student Jasen Meyers furnished homes for a living. So, what made him want to pursue an education in global trade and logistics?

“I was always curious why, when I put a purchase order in, why it took two to three months before we actually got the furniture out here,” Meyers said. “Just being exposed to that industry piqued my interest on trade in general.”

The study of global trade and logistics teaches students about the movement of products, goods and services from around the world to consumers.

Meyers said the furniture manufacturers he worked with were often based in India, China, Malaysia and Indonesia, as well as some domestic companies in North Carolina.

“I was kinda already in the sphere,” Meyers said about the industry. “That’s why I decided I just wanted to know more about it.”

It’s also why when he was unfortunately laid off from that job, the now-30-year-old figured he’d turn a negative into a positive and accepted the challenge to go back to college and study business.

Before he knew it, Meyers found himself graduating with his associate degree in international business and trade from Highline in spring 2019 and enrolling in the college’s Bachelor of Applied Science in Global Trade and Logistics shortly after. He now expects to graduate with that degree in winter 2021.

During his two years at Highline, Meyers has actively worked to stay engaged with the campus community and his own learning.

He became Business Club president in 2019 and has worked to put student club members in front of employers, subject matter experts and conferences.

“I want to give people the opportunity to get exposed to marketing, get exposed to branding, design or manufacturing, advertising, accounting and finance,” he said. “Anything we offer here, just so all the members can figure out what they like and don’t like.”

Meyers said too many times people think they’re interested in a field but, once they pursue it, they find out it’s not for them.

He’s also worked to expose himself to different jobs within his field of study by seizing various opportunities. He’s interned for Bellevue-based Paccar and, in September 2019, Meyers was one of four Highline College students chosen to study abroad in Vietnam. The trip was organized by Highline’s Global Programs and the state’s Center of Excellence for Global Trade and Supply Chain Management, which is based at Highline.

The scope of the study abroad trip was to follow the supply chain of Washington-grown apples and Brooks Sports footwear, based in Seattle.

The study abroad experience included day trips to Wenatchee to see the apples being harvested and Brooks’ headquarters before the students traveled to Vietnam. There, they met key players who build relationships with Vietnam’s agriculture industry and visited a factory to see how shoes are made.

Meyers described the experience as “life changing” and appreciated the different world views he gained while there.

In fact, in January 2020, Meyers accepted a job from Brooks Sports as a trade compliance coordinator.

But even after Meyers graduates with his applied bachelor’s degree, he doesn’t plan on stopping. His next move is to get into the University of Washington to pursue either a Master in Supply Chain Management or Master of Business Administration.

Until then, he’s thankful for the instructors who’ve helped him along the way, which include business instructors Shawna Freeman, who is the Business Club adviser, and Samad Chakour, who Meyers describes as “one of the most passionate teachers” he’s had.

Learn more about the applied bachelor’s degree in global trade and logistics.