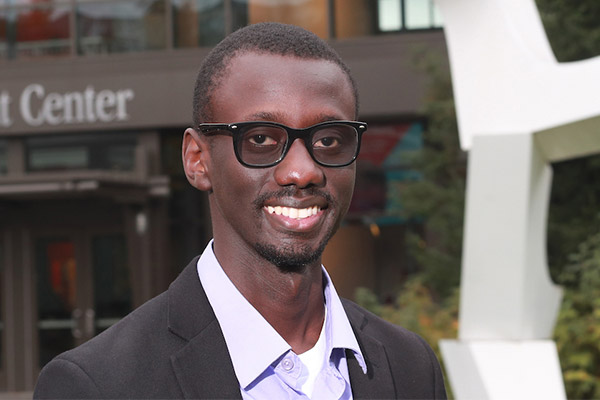 Two-time student body president reflects on journey from The Gambia to graduation.

After four years of hard work, dedication, support and a little bit of “culture shock,” in June 2018, Pa Ousman Jobe finally got to call his mother in the Republic of the Gambia to tell her he had accomplished his dream they often spoke of when he was younger.

His dream to attain a college education had become reality.

Since Jobe graduated high school in the West African country of The Gambia in 2011, he’s wanted to go to college. But his father suffered an accident that forced his father into retirement just as Jobe was getting ready to take that next step.
Instead of looking for colleges, he was now looking for a job.

The Gambia, a small country with scarce economic prospect, offered little for the ambitious teen. So, he looked inward and search for any job that would put money in his pocket.

Jobe eventually found an internship with a bank and worked for three months before he seized the opportunity to become a teller. It was that moment he learned his first lesson in life: Don’t be afraid to go off course and change plans.

There, he sought every additional responsibility, and, when it came time for his supervisor to go on vacation, Jobe was chosen to step in.

Although he was a hard worker and was clearly trusted, Jobe found others surpassing him in the job. He felt he might be stuck in the same position because of his lack of certification and he had wanted to leave the oppressive regime that had made living in The Gambia so hard.

“Rage and emotions had to be bottled up so you could stay alive,” Jobe said, explaining that people weren’t able to speak freely of the country’s failures.

After working at the bank for two years, Jobe took a leap of faith and applied to Highline College while still living in The Gambia. He was accepted and needed to start making plans for his next journey.

Jobe applied for an immigrant visa, however it came later than expected. Suddenly, Jobe had to make a dramatic life change in less than one week.

And flexible he was.

Not only was Jobe ready to adapt and change, but he mentally prepared himself to leave his friends, family and home country in pursuit of his “empire.” This was not a painless process, but he was glad for the support he received from loved ones during this transition.

While at Highline College, he volunteered for clubs, events and activities in which he “had no idea what was happening.” But, during that work, he began to learn about American life and systems, Highline life and how to survive. He began work at the college’s Conference and Event Services and, “in that year, learned more about the college than [most] people who probably work on campus,” he said.

After one year at Highline College, Jobe sought office as the student body president and won. He served the Highline student body during the 2015-16 academic year and, along with his colleagues, advocated for a light rail station near the college. He hosted a rally, attended forums and spoke to local government officials to draw attention to student issues. This, he said, taught him that he should always be willing to take a risk, but to do so strategically. He also worked to update the student body constitution to be more inclusive and learned that it’s best to reflect on one’s actions not just after a mistake, but when you think you’re doing the right thing as well.

All of the universities accepted him.

Figuring out how to pay for college posed a challenge, however.

In the end, Jobe chose to attend Seattle University as he had received the most scholarship funds for that university. As a transfer student, he was awarded a $16,000 Messina scholarship and a $10,000 Alfie scholarship.

Perhaps inspired by his banking job in The Gambia, Jobe decided to major in finance and minored in economics.

Although Jobe struggled during his first year at Seattle University with some personal and financial difficulties, he found solace leaning on his “community.”

“I almost gave up after junior year, with one more year,” he said, adding that depressive symptoms caused him to lose focus in class.

But some of the other Alfie scholarship recipients and program coordinators helped him through this difficult moment. He says, because of them, he made it to graduation.

Jobe’s last year of college was spent in office as, you guessed it, student body president of Seattle University.
“I didn’t want another person in my shoes to have to go through that,” Jobe said of his previous struggles – one of the reasons he sought office.

During his presidency, Jobe met with faculty and staff and requested they do more to engage and act with the concept of educating the whole person, as enshrined in the Seattle University mission.

“Always trust in the power of individuals, they can bring about changes that change the universe,” he said, noting that people have the choice to choose love, hate or ignorance. “I chose the path of love.”

In the last year, Jobe has been voted to Seattle University’s homecoming court royal and has won the Distinguished Graduating Students Award – one of five students.

He has learned to always be grateful for those who helped him during the hard times and many of those people, he said, were instructors at Highline College and other folks he met along his journey.

As Jobe looks to his future and the challenges that will come with the future, he can’t help but reflect on his four-year educational journey.

From his struggles to his victories, Jobe has come a long way since his banking days. Sometimes, however, he needs to remind himself not to settle. As a first-generation college student who emigrated from The Gambia, he’s confident not many people can say that, but grateful to all those who had been a part of his story.

As far as advice to other Highline students?

“I hope that what you’re doing, you can say you’re proud of yourself.”