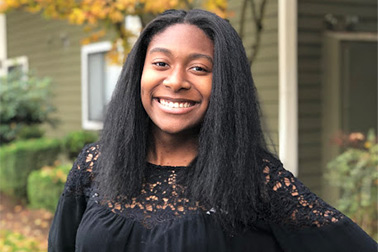 Forensic Science and the Arts

‘Military Kid’ Branches Out at Highline.

Growing up a self-professed “military kid,” Amara Bailey moved around a lot as a child.

But as hard as it was to move, Bailey said her journey helped shape her.

“Moving around has helped me open my eyes to different communities from big, small, diverse and little diversity,” Bailey said. “Without moving multiple times, I do not think I would, honestly, be the person I am today.”

And it also brought her to where she is today –– learning remotely at Highline College during the COVID-19 pandemic.

“I am motivated to stay in college by the support of my family, friends and my boyfriend,” Bailey said. “Without their support, I don’t think I would be trying my best to pass the classes I am currently in right now.”

Bailey started at Highline in summer 2019 because she said it was a lower cost alternative to a nearby university she was initially interested in. Now, she’s pursuing an Associate of Science in biology and hopes to graduate in the 2021-2022 academic year.

She says she chose biology because she always liked the idea of having a career in science or health care.

“When I was little I had the idea of being a veterinarian,” Bailey said. “Then, when I grew up a little more, I wanted to be a doctor. During early high school, from freshman year to sophomore year, I wanted to be a cardiologist, and now a forensic scientist.”

Bailey said she grew up watching forensic files and crime shows and was further inspired by her former forensic science high school teacher, Tom Decker, who works at Thomas Jefferson High School in Auburn, where she graduated from.

Bailey said it was Decker’s passion on the subject that pushed her toward the forensic science field.

Today, Bailey credits Highline ceramics instructor Rob Droessler and music instructor Janene Nelson as being especially influential –– and in subjects outside of forensics.

“Both artistic beings went out of their way to push their students to success,” she said, adding Droessler let her experiment with Pokemon and pop culture in her class while Nelson helped her be more confident in her singing. “Without both Rob and Janene’s support I do not think that I would have experienced a different angle of thinking towards ceramics and vocal performance.”

Bailey explained that although she’s interested in the sciences, she’s been singing and drawing since she was 3 years old. She knows how to play multiple percussion instruments and the trumpet in addition to having experience in theater, choir, the marching band and concert band –– some of which she said she’d like to explore further as a minor when she pursues a bachelor’s degree.

And she hopes to attend the University of Washington Seattle or Tacoma after Highline College to do just that.

Although Bailey started at Highline to save money, she’s quickly found other benefits of attending. The small class sizes allowed her to bond with instructors like Droessler and Nelson. And she’s been able to find her community in spite of less-than-ideal circumstances from the pandemic.

Outside of class, Bailey works as a New Student Navigator in the Advising and Transfer Center. In that position, she works online to help students with questions, checks students into appointments with advisors and helps with the department’s social media accounts.

Before the pandemic, Bailey volunteered at the ceramics studio during fall 2019 and winter 2020, as well at the Highline Community Pantry.

“The thing that surprised me after taking classes at Highline would have to be the fact that there is a food pantry on campus for those in need of food,” she said. “I volunteered at the food pantry for weeks and built friendships with the amazing people that volunteer there.”

Learn more about our Associate of Science in Biology.