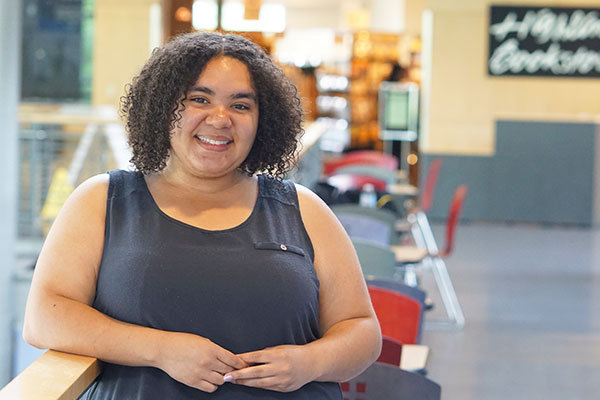 Julliannea Plummer was told she couldn’t go to college because of her learning disability.

But that hasn’t stopped her from earning a certificate from the Achieve program, completing her associate degree in visual communications this summer and planning to start working on her bachelor’s degree in Highline’s inaugural Integrated Design program this fall.

“What keeps me going is to show those who never believed that I could do it, that I can, am and going far,” the 27-year-old Seattle resident said.

After Plummer receives her bachelor’s degree, she said she would love to work with people with disabilities so that, through her designs and photographs, she can bring awareness to the greater public.

In fact, her favorite thing about being a Highline student is the diversity of students on campus.

“It is wonderful to attend college with others who understand the societal struggle that I go through,” Plummer said. “It is nice to attend a college that not only welcomes students with disabilities, but embraces them and helps them succeed. Never have I felt ‘less than’ when attending Highline.”

Plummer began at Highline College in 2016 and has since received two Student Legacy Awards for Achieve and her academics. She’s also received an Employee of the Month award as a peer navigator, and has gotten involved with Anime Club, Cooking Club and Crochet Club.

She said it’s important to be involved in college life, as opposed to just academic classes, because it’s helped her stay connected.

“When I learned that I need to be connected with the campus and to others,” Plummer said, “I bloomed as an individual, which led to the building of my confidence.”

Plummer also worked on building her confidence during an opportunity through Highline College. While attending a leadership conference in New York, she confronted her fear of public speaking by speaking in front of an audience. Although she’s always been nervous about asking questions or for help, she says attending Highline has given her the confidence to advocate for what she needs.

“Julie Pollard once said to me and my fellow classmate to keep us going, ‘I am supposed to be here and I am smart enough!’” Plummer recalled. “Along with that, I wanted to thank her for always believing in me and watching me grow as an amazing person.”

When Plummer’s not working on her design degrees or interning in the Print Shop, she’s likely pursuing her other passion –– capturing the world through photography.

“I love catching the moments of people’s lives and the beauty of the landscape,” she said. “I am passionate in helping people to bring out their ideas and to give them a voice.”

Learn more about our new Bachelor of Applied Science in Integrated Design.