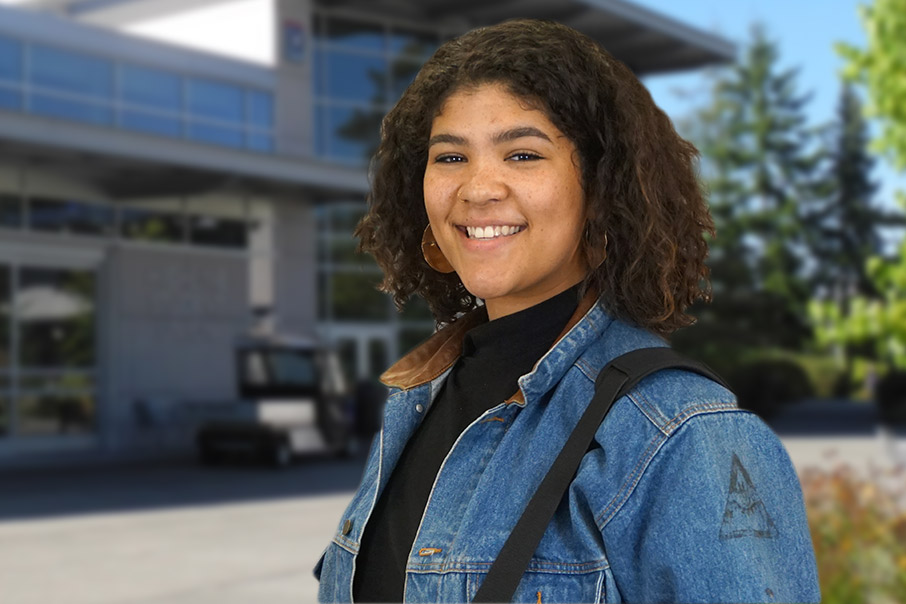 A Jack of all trades and a master of some

Gaebriel’s a scholarship recipient on a path to becoming a graphic designer.

Gaebriel Wilson feels at home when she’s on campus at Highline College.

When she’s not in class studying visual communications with hopes to become an identity designer and graphic artist, she’s appreciating the 5 o’clock golden hour just outside of the Mount Jupiter Reading Room. The view of the Puget Sound, she says, is breathtaking.

“There’s never a dull moment here, and every person I meet feels like family,” she said of Highline, noting she didn’t think it would be fun to stay on campus 9-to-5, but that’s what she does most days.

But her hard work and dedicated time on campus has clearly paid off because Wilson has been awarded two highly coveted Highline College scholarships. During her first quarter, she was awarded a Foundation Scholarship, which she receives funds from each quarter for a total of two years.

And, this school year, she earned the Whipple Memorial Scholarship, a scholarship for those pursuing degrees in print production/graphic design. The scholarship was created to honor John Douglas Whipple, who dedicated 30 years to teaching in Highline’s Printing program.

This quarter is Wilson’s third at Highline College. She hopes to graduate in June 2019 with her associate degree in visual communications.

“I like to say I am a Jack-of-all-trades and a master of some. I enjoy dabbling in several types of art, including metal sculpture, music and fine art, but I hope to pursue graphic design as a career,” she said.

The Bonney Lake resident currently works in the Center of Leadership and Service as a community leadership consultant. After Highline, she has plans to either get her bachelor’s degree in applied design at Lake Washington Institute of Technology or wait a year and backpack through Europe. She hasn’t decided yet.

One thing she is certain of, however, is Highline College gave her a fresh start.

“I was told Highline had one of the best Graphic Design programs in the area,” Wilson said, “and it most definitely does!”


Get Started at highline