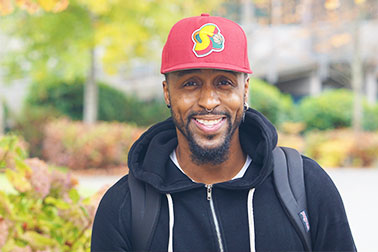 Choreographer gets down to Business

Isaiah Rashaad is not your typical college student.

The 32-year-old Algona/Pacific resident has already traveled the world as a professional dancer to work with famous celebrities, such as Rihanna, Justin Bieber, Chris Brown, Kelly Rowland, Todrick Hall and Jane, the Chinese international phenomena. He’s even featured on the 2019 Just Dance video game cover and has worked with the Shanghai-based company doing motion capture work since 2017. Companies, such as Nike, Adidas, Porsche and Ed Hardy, also make an appearance on his resume.

So why did Isaiah find himself stepping into his first college classes this fall?

He says it’s time to give back.

“I really understood the power of dance in being able to go to Asia,” he said. “People who have a completely different lifestyle and language, but we’re able to connect through dance. I can step one way and you can learn to step the same way … and to realize the power of that and to know I can help people connect with the music … it’s so impactful for me.”

Isaiah is currently pursuing his Small Business/Entrepreneurship Certificate so that he can one day open his own business, which would offer dance instruction and artist development training for both dancers and singers.

The Tyee High School graduate said, growing up, he wasn’t always supported when it came to pursuing his love of dance. One parent, in particular, tried to steer him away to other activities, such as karate, which he ended up doing for eight years as a child. But he soon found his way back after one of his karate senseis saw him dancing to “Uh Huh” by B2K at their annual talent show and recommended he join Westlake Dance Center.

With his passion for dance renewed, Isaiah and a friend from Chinook Middle School performed a Michael Jackson dance routine at the school’s talent show and, when he got to high school, he and his friends started a dance team by the name of Point Blank.

“We started going to professional dance conventions and eventually we went to LA and trained,” he said. “And it grew from there.”

But, looking back, Isaiah said he could have benefited from the very business he hopes to grow one day.

Isaiah said his business would help dancers cultivate their artistry and give them inside tips and tricks for success. Learning about landing an agent, deciding on a market, picking up backup dancer skills and learning how to be aware of camera angles are all services that would be offered. For singers or other artists, he would teach them how to hold a microphone, hand coordination and how to pitch to a record company, styling and media training, among other skills.

“People who want to be singers are –– it’s the way the times are now –– they’re Instagram famous and they go straight directly into things but they’re not cultivated as an artist, so they rise really fast and they crash,” Isaiah said. “There’s no substance to their artistry other than they got hits on Instagram and now they don’t know what to do.”

But Isaiah’s business won’t just focus on people who want to be in showbiz. He said he’s actually had some of the most fulfilling moments by teaching dance to those simply looking to move their body.

He recalled an 8-year-old boy who took a “heel intensive” class, which teaches students how to dance in heels.

“Both his mom and dad were giving him heels and pushing him in class,” Isaiah said. “Somebody not being afraid of being creative is something that helps me to overcome myself because I’m like, ‘OK, there’s a bigger purpose than just me.’ So I’d love to do more things like that.”

Although Isaiah has a few more quarters before he graduates from Highline with his Small Business/Entrepreneurship Certificate, he says he’s already learned so much in the classes he’s taking. Not only that but he’s grateful for the many resources Highline offers to students.

“I had a whole perception of what college was but, in coming here, I realized you can actually focus on whatever you want to focus on and take the classes geared toward that,” he said.

When Isaiah isn’t planning his next venture or going to school, he’s teaching dance at four different local studios during the week and is active on social media, working on his brand.