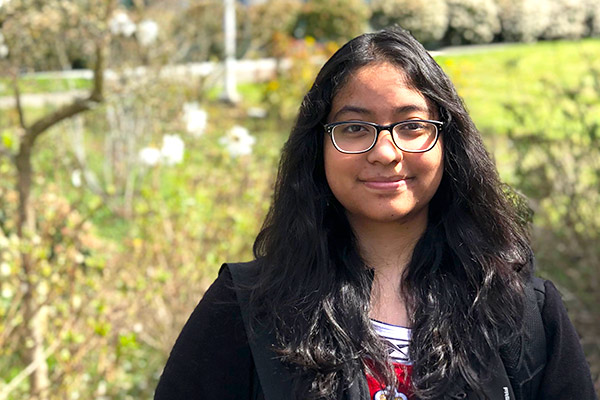 Growing up, Abigail Colmenares felt discouraged by her teachers. She believed they dismissed her because of her Latina culture and heritage.

But Colmenares knew from a young age she “wanted to be something grand.”

“I always said, since age 7, I was going to be a doctor,” the 20-year-old Highline College alumna said.

Now, after having graduated Highline College in winter 2019 with an associate degree in biology, Colmenares is enrolled at the University of Washington studying bioengineering.

And she credits Highline College for helping build back her self-confidence to get her to where she is today.

“I always thought school was something that was going to separate people,” said Colmenares, who lives at the border of Auburn and Federal Way. “Like, ‘Oh because you’re a Latino, you’re not going to be as good as…’ So, it was discouraging. But when I came [to Highline] it was a different acceptance. It was like a new awakening. Everybody here is super nice.”

Although Colmenares struggled working two jobs to pay for college and realized she needed to work on her time management and study habits, she said she appreciated Highline’s diverse student population and the way she was treated.

Instructors, such as Melissa Moehlig, a chemistry instructor, and Terry Meerdink, her math instructor, showed they cared about her and taught her how to study. While Osure Brown, retention coordinator of the Math, Engineering, Science, Achievement (MESA) Program, helped her figure out a way to manage her busy life.

In fact, it was at MESA where she said she found her community at Highline College. Colmenares was eventually able to drop her second job and become a student ambassador for the program, which serves underrepresented students –– including women and people of color –– in the science, technology, engineering and math (STEM) fields.

“Every time I go there, everybody knows me and I know them and it’s really cool,” she said.

Colmenares’ passion for science stems from her desire to help others. She said she has two pathways she’s interested in pursuing after college, which is to go into medicine or stay on the bioengineering path and conduct diabetes research.

“My family has a history of diabetes and it’s always been a reoccurring issue not only for my family, but outside my family,” she said, noting the disease’s prevalence in the United States today. “I was thinking that once I develop [solutions or a cure to diabetes] I could bring it into my little ranch in Mexico because, in my ranch, they don’t have clinics there and the closest hospital is two hours away.”

Colmenares explained the “little ranch” is located in a small town her father grew up in, yet she considers it her own because she visits the ranch often.

But, until then, the Husky looks forward to joining various STEM clubs, studying for her major and picking a minor. At the moment, she’s considering mechanical engineering or “maybe a fun elective,” like math, Korean, English or Spanish.

“I was also thinking of neurology, but I was like, ‘Maybe that’s too much on my load,” she said, smiling.