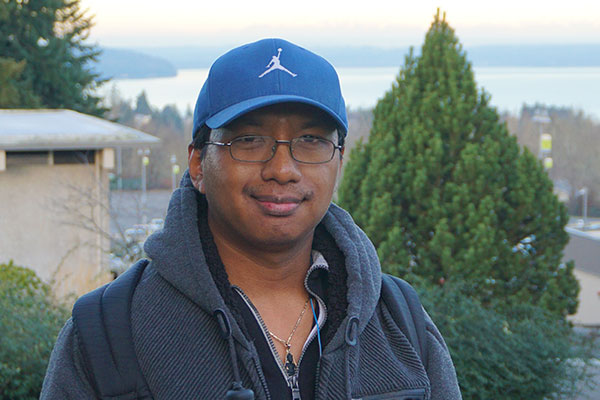 The first thing to go, Diep said, was his night sight.

Then, his peripheral vision.

Now, at 30 years old, Diep relies on a cane to help him navigate and uses an audio screen reader for his computer.

Yet, when he was a child, he couldn’t foresee where he would be now. In fact, Diep didn’t learn of his diagnosis until he was 15. Unfortunately, his younger sister was also going through symptoms of retinitis pigmentosa, which made things confusing.

“We thought that’s how it’s supposed to be and my parents didn’t know either,” Diep recalled. “But, slowly, our peripheral vision went away.”

Once Diep’s peripheral vision faded between ages 11 and 12, he realized he couldn’t play sports anymore.

“I couldn’t see the ball on the sides and when the ball moved very fast — that’s when I started losing sight of — my eyes couldn’t keep up with the movement of the ball,” he said.

Eventually, he, his sister and their family went to the University of Washington Medical Center in Seattle to learn of their diagnosis.

“It was a relief to finally know what was going on with our eyes, to have something to explain,” Diep said. “But it’s an eye condition that deteriorates over time and I think in 2011–12 was when my vision deteriorated to the point I needed to use a cane. I couldn’t use my eyes to read letters or anything like that anymore.”

During his teenage years, Diep went to the Department of Services for the Blind to learn about success within the blind community, which left him optimistic. But, once he had to use a cane and an audio screen reader, he said he began to lose hope.

It was also when he realized his dream of becoming an animator would no longer be. Having enrolled in the Art Institute of Seattle years prior, Diep said he tried to push through his vision loss, blaming his poor grades on his “lack” of skills instead of his disability.

“I always blamed it on me; that I wasn’t getting the material,” he said. “But that was wrong because I understood how to do everything. I even helped a lot of other students with their homework, telling them the steps on how to do things.”

For about a year or two, Diep said he wasn’t in a good place mentally and emotionally, even feeling as though he was lost.

“I didn’t know what to do,” he said. “This thing I really loved and wanted to pursue, I couldn’t do.”

And yet, something within him finally said enough was enough.

Years later, Diep reconnected with the Department of Services for the Blind and asked for help. This time, he learned valuable skills, such as walking with a cane, how to navigate the bus system as a blind person, cross streets, find addresses and more.

Empowered, he started looking at community colleges that had Access Services. He first enrolled at Highline College in spring 2017 and took two quarters until his education was put on hold due to financial aid confusion followed by a family emergency.

Undeterred, Diep reenrolled the following fall 2018 quarter and has been successfully working toward his associate degree so that he can transfer to University of Washington’s accounting program. He hopes to graduate in spring 2020 with an associate of business degree.

During his time at Highline College, he’s appreciated the instructors that go above and beyond for him.

“My math instructor Sara Adams has been, by far, the greatest help in making sure her course is accessible for me,” Diep said. “I’m comfortable with math, but math can be difficult because of how visual it is and how difficult it can be to make it accessible.”

He said a simple change in homework systems, from My Math Labs to My Open Math, made all the difference.

Diep’s English 101 instructor was also active in his accommodations, which gave him a good first impression of Highline College.

“That helped me with my first impressions of college, and helped give me more optimism, and hope that I can do all this stuff,” he said. “Because, had they been very dismissive and unhelpful, it would have been very disheartening and discouraging. I don’t know how motivated I would be to complete my school work as hard as I do.”

Although sometimes he gets frustrated with finding certain buildings or when people bump into him as they walk, looking down at their phones, overall Diep has enjoyed his time here at Highline College.

“Going to Highline made me more optimistic that things can work out,” he said. “That I can do things the same as anybody else, just in a different method, a different workflow.”