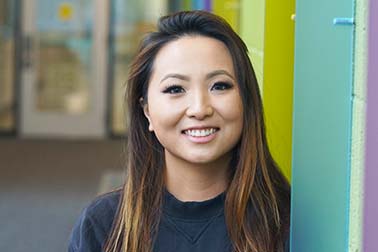 In fall 2019, when Mai Xee Lor began taking classes at Highline College for her bachelor’s degree in respiratory care, she had no idea what was coming.

She had been working as a certified nursing assistant (CNA) at St. Anne Hospital in Burien and pursuing a career in nursing when she learned specializing in the respiratory system was the key to helping those most vulnerable.

“The types of patients they care for and treat are usually critically ill and need the most attention,” Lor said of respiratory therapists. “And, because of this, I felt like I would be a better fit to pursue respiratory [care], due to my passion for helping those in need…”

But then the unimaginable happened. In March 2020, the World Health Organization declared a global pandemic caused by COVID-19, a deadly respiratory virus that would go on to kill 5.6 million in less than two years. Lor was no longer studying to become just a respiratory therapist, her studies now centered around helping those affected by the deadliest pandemic the world has seen in 100 years.

“Before the pandemic, I just felt like respiratory care would be the right career path for me,” she said. “During the pandemic, it confirmed that for me. Being able to be at the front line to fight the pandemic and help others has given me a purpose and motivation to challenge and appreciate my life every day.”

Lor said she has certainly had some “heartbreaking” days in seeing people who haven’t made it during her clinical rotations, but she chooses to live for the good days. Good days are when people’s immune systems persist. Good days are when that persistence turns into survival and a hospital discharge.

“Those are the moments I look forward to and that is the motivation that keeps me going,” she said.


At age 27 and living in Renton with her two “fur babies”, Lor looks forward to graduating winter 2022 for more reasons than the momentous act of stepping into her career after years of study.

She’ll get to sleep more.

“There were many days where I would have to take naps in between classes in my car and then head straight to work a 12-hour night shift,” Lor recalls. “The struggle of having to stay awake in class and staying awake at work had put a toll on my body.”

Although she has since quit her job as a CNA to finish up her last quarter and study for her state exams, Lor jokes that she wishes she had known more about the different types of energy drinks out there before starting college. This is because she often skimped on the recommended daily 8 hours in order to pay for her schooling, her rent, car payments and bills all while trying to get her degree.

“I’m thankful for Red Bulls and my professors at Highline who, understanding my struggles, had made many accommodations for me,” she said, adding they’d let her stand in the back of class during lectures so she could avoid falling asleep and were understanding if she was a few minutes late.

Lor said she’s had many influential instructors during her time at Highline but a few stand out: Dr. Ann Korn, Kayoko Kado, Crisostomo “Cris” Alamajose and Pawlos Okubagzi.

“Throughout the Respiratory Care program, they have continued to support me as a student and challenged me every day with positive encouragement,” Lor said, noting Korn has always been a professor she can count on when she needed someone to talk to, Kado never leaves a student behind, Alamajose is clear in his teachings and Okubagzi challenges her to think harder. “For that, I’m thankful for all of them.”

Once she’s graduated and has passed her state exams, Lor hopes to find work as a respiratory therapist in the Pacific Northwest but she won’t forget the college that helped her on her career path.

“When it was time to start applying for the respiratory care programs here in Washington, back in 2019, I put all my eggs in one basket at Highline College,” she said. “And, to my relief and surprise, I got in. To this day, I still have my letter of acceptance.”

Learn more about our Bachelor of Applied Science in Respiratory Care