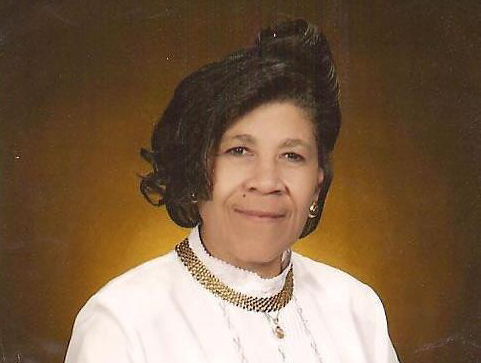 When Sandra Cravens Robinson recounts her early life, the words “first” and “only” pile up quickly.

Born Sandra Michelle LaVern Cravens in Philadelphia, she was raised primarily in Seattle. Growing up, she followed her life’s purpose, not intending to be a pioneer for people of color, yet accomplishing it just the same.

From her earliest memories, around the age of 3, she had always wanted to be a nurse. She saw the career as a way to be a blessing to others, her purpose in life. 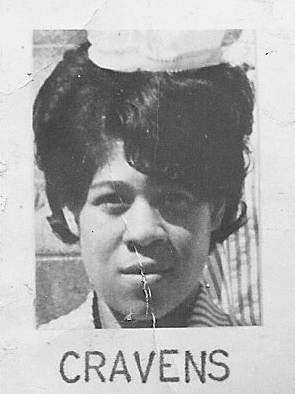 Fulfilling her purpose — clearly communicated to her by her faith in God — gave her the resilience not to be deterred by doubters and discrimination. Early on, there was plenty.

As an 18-year-old high school graduate, she was accepted into a three-year nursing program. It was the program of her dreams, or so she thought. She gladly parted with $950 in tuition — which would be about $7,500 in today’s dollars — and headed from her home in Seattle’s Central District to Portland, Oregon, to begin classes.

When she first arrived at the hospital in Portland, she was greeted by the dean of nursing with, “Oh, I didn’t know you were Negro.” She lasted about three months in that setting.

She returned to Seattle and found another nursing school. The all-white interview panel was reluctant to enroll her because of her “big hair,” thinking she was better suited for waitressing. They consented to letting her “try” the one-year program for licensed practical nurses (LPN). She took this opportunity seriously, and in her words, “prayed, buckled down and worked hard.” She successfully passed the LPN boards in February 1964.

Being an LPN was not her career goal, but having the license helped when she applied in 1964 to a nursing program that was beginning at a relatively new community college south of Seattle.

Highline College had opened its doors in 1961 as the first community college in King County, and in 1964, introduced a new two-year program to train registered nurses. Only 25 students were chosen from the 200 or so applicants. Sandra Cravens was one of them, and she was the only student of color. 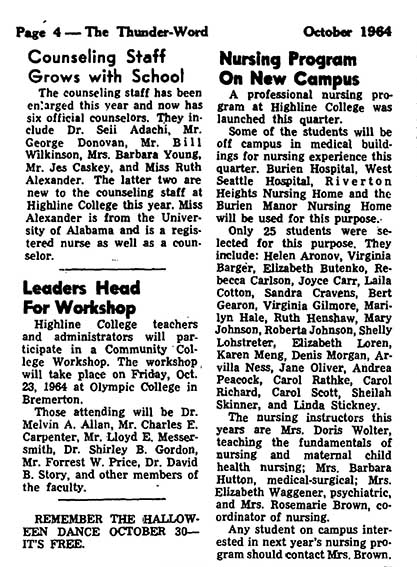 In its October 1964 issue, Highline College’s student newspaper reports on the new Nursing program. Sandra Cravens was among the first 25 students selected from approximately 200 applicants.

Looking back on those years, Robinson said she wasn’t the target of any discrimination at Highline, even though the student body was predominantly white in the 1960s.

“We had a close class,” said Robinson, who treasures her photos from class reunions, both informal and formal. “Sixteen of us graduated.”

After graduating from Highline, she began her career in surgical nursing at Providence Hospital, Seattle, where she cared for patients following their procedures. She also did stints in medical, pediatric, newborn nursery and obstetrical nursing to become a well-rounded nurse.

Following several years as a generalist at Providence and the University of Washington Hospital, she looked into specializing in psychiatric nursing, a field she first experienced while at Highline during a clinical rotation at the VA Hospital. She learned she would need a bachelor’s degree in nursing and immediately applied and was accepted to Seattle University.

“They allowed me to work in the psychiatric ward while I worked on my bachelor’s in nursing. I felt grateful that they would keep me on while I was pursuing the degree and gaining expertise.”

Seattle University’s program for registered nurses looking to earn a bachelor’s degree in nursing was relatively new in 1972.

What Robinson finds especially significant about her time at both Highline College and Seattle University — as well as during different points in her life — is that opportunities materialized just as she needed them. In her eyes, God does open doors and miracles do happen. 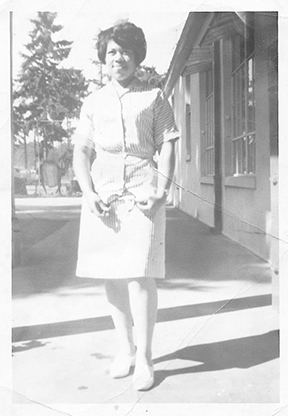 “I see God’s weave in my life from early on and I feel so appreciative to Him for all the experiences and opportunities that He has allowed.”

While she was growing up, her parents didn’t go to church, but still believed in the importance of religious experience for their children. They made sure all three children went to church.

At the age of 7, she felt a strong pull toward more than a child’s typical Sunday school experience, and found herself in the regular morning service with the adult congregation.

“I looked at the stained glass windows with the religious icons and the brilliance of the sun shining through and felt God’s presence. I just felt Him. I was elated. I found where I was supposed to be.”

That transformative experience led to her being baptized shortly thereafter. Her family didn’t share her religious devotion, but they did not hinder her spiritual growth.

“I was the only one saved in my family until 1984 when my eldest brother accepted the Lord. My parents trusted me to be who I needed to be. My family didn’t always understand my motives and priorities, but they consistently demonstrated their love for me.”

After earning her bachelor’s degree, she had also acquired credentials to enter the seminary. The seminary interested her because back when she was attending Christian high school, she came to understand that “part of my divine destiny included both nursing and the teaching ministries.” Yet again, another door opened.

“That’s when another opportunity opened for me. Another school! I graduated in June from Seattle University and classes at the Interdenominational Theological Center began in September of 1975.”

At the ITC in Atlanta, Georgia, she pursued a Master of Divinity with a concentration in pastoral counseling. She finished the three-year program and graduated with honors. 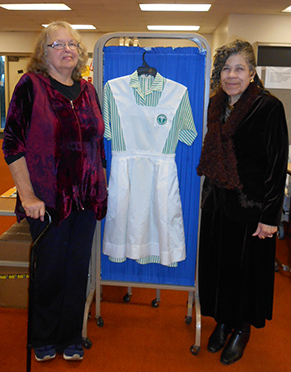 Carol Rathke Towle, left, and Sandra Cravens Robinson flank a uniform they would have worn as two of the first students in Highline’s Nursing program. The 1966 graduates, who have remained close friends for the past five decades, returned to campus for a December 2014 event marking the 50th anniversary of the program.

Now with her master’s degree, she would make her next career move. She was equipped with skills in psychiatric nursing and in pastoral counseling. She could have been a chaplain in a hospital, given her credentials as a nurse. She could also be a chaplain or nurse in the military.

“After much prayer, I was called to active service in the Army and to the Nurse Corps with the opportunity to provide biblically oriented interventions as needed.”

She entered the military as a First Lieutenant in 1982 at the age of 37. During her celebrated career, she served as a team nurse, charge nurse and head nurse. Later in her career, she served as a clinical nurse specialist in psychiatry and Dean of the Army’s sole psychiatric nursing program. She was stationed in several locations across the U.S., including Georgia, Hawaii, Texas, Washington state and Washington, D.C., and served oversees at the 121 Evacuation Hospital in Seoul, Korea.

It was while stationed in Augusta, Georgia, that she met her future husband, Ray Robinson. They have since parted after 23 years of marriage, but still keep in touch. And she counts her three adult stepchildren and several grandchildren as a significant part of her life.

Education remained an important part of her life while in the Army. She earned her master’s degree in nursing in 1993 from Medical College of Georgia in Augusta. She retired from active duty in 2002 as a Lieutenant Colonel.

After the Army, she continued to work in nursing, including 10 years at Madigan Army Medical Center as a civil servant until retiring from full-time work in 2014.

She had too much energy and drive — and too much to contribute — to completely retire, so she began working as a licensed mental health counselor for Infinite Possibilities, a private practice. She has her own caseload, working one day a week, sometimes two if the workload demands. She has opportunity to use her nursing skills frequently in the care of her clients and others.

She remains active in her church, serving as an Evangelist Missionary in her local congregation, in the district and in the state. In her local church she serves as a nurse, vice president of the Mother’s Board and member of the Program Committee for the Women’s Ministry. Her district work includes working in support of the District Missionary in the execution of the Women’s Ministry. Her state responsibilities include chair of the Program Committee and president of the Executive Board.

Now 72, she is nearing completion of a doctorate in psychology from California Southern University through an online degree program. The degree would be a fitting capstone for her more than 40 years in psychiatric nursing and yet another demonstration of her lifelong commitment to education.

While many at her age would slow down, she has no such inclination. And if her parents’ longevity is any indication — her father lived until age 93 and her mother just celebrated her 100th birthday — time is on her side.

“God blesses me every day with something new. It’s been a spectacular life,” she said from her home in Spanaway, where she has lived for the past 18 years.

Robinson’s achievements are many: nearly 50 years in nursing, 20 years as an officer in the military and several academic degrees.

During Highline College’s 2016 Commencement ceremony, which marked the 50th class of Nursing student graduates, Sandra Cravens Robinson was presented with the college’s Distinguished Alumna Award for her outstanding contributions to the community and country.

“Highline marks the launching point for my nursing career. There are different opportunities presented in this life with many choices. When we take time to hear from the Lord, He always leads with purpose and a plan,” she said.

She is the first Nursing program alum to earn the prestigious honor, another fitting first.

The Distinguished Alumnus Award honors a former Highline College student who has made outstanding contributions through community service, noteworthy professional achievement and/or recognized leadership. Former Seattle Mayor Norm Rice, who attended Highline College in 1968–1969, was the first recipient of the award in 1990. Other past honorees include Ezra Teshome, agent with State Farm Insurance and TIME magazine global health hero; Dr. Linda Petter, a local health care advocate; and Junki Yoshida, founder and CEO of the Yoshida Food Group.