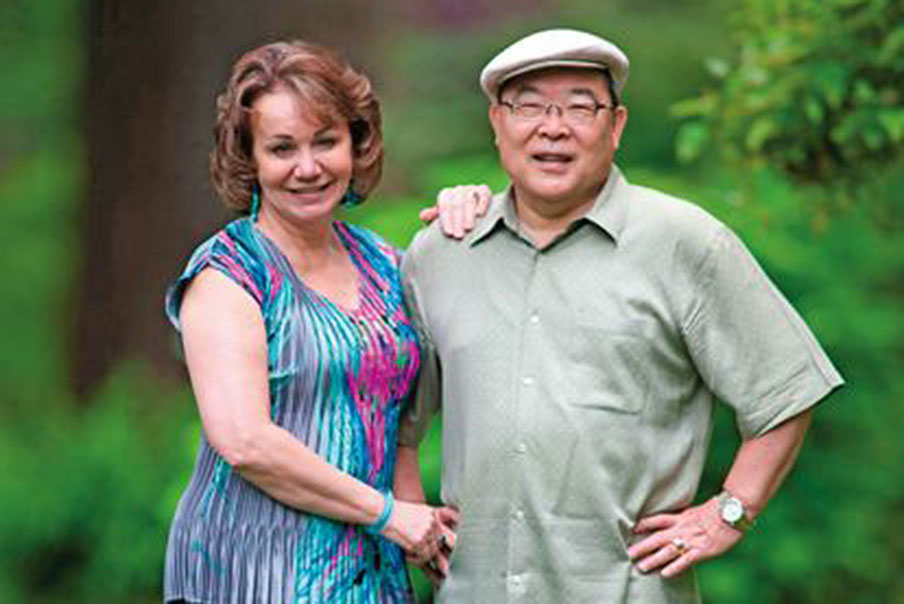 Highline College is an unforgettable place for Junki and Linda (McFarren) Yoshida. It is where they met and fell in love. It is also where they discovered their paths to future success.

“My attendance provided the significant turning point in my life that eventually determined my career path. Highline was responsible for my business success,” said Junki, who privately owns a family of diverse companies known collectively as The Yoshida Group, based in Oregon.

For Linda, who is now an award-winning author, Highline is where she discovered her passion for writing.

“I always had a vivid imagination and enjoyed telling stories, but never felt I truly had a gift for writing—at least not until this wonderful teacher opened a whole new world for me,” she said, referencing Lonny Kaneko, who has taught at Highline since 1966.

Neither Junki nor Linda came from families where college was encouraged. So what brought them to Highline?

Junki grew up poor, living solely off income generated by the family restaurant in Kyoto, Japan. In 1968 at the age of 19, Junki left his parents and six siblings to come to Washington state. He was determined to pursue the American Dream. When he arrived, he cashed in his return airline ticket for $500 and purchased a used Plymouth Valiant, which he parked at Alki Beach and called home until he could make enough money to move into an apartment.

While earning a minimum-wage salary, he quickly learned that he needed to improve his English skills to be successful. He enrolled at Highline in 1970 to study English, where, with no money to pay for tuition, he taught karate lessons in exchange for classes.

Linda also came to Highline in the early 1970s. Like Junki, she grew up in a household where work followed high school, not college. But Linda was determined to follow her own path. With her newfound passion for writing, she graduated in 1974 with an Associate of Arts degree with an emphasis in literature and business administration.

Beginning with a secret

She and Junki first met on campus through karate demonstrations. One Christmas, lacking funds for gifts, the couple created and gave away a homemade teriyaki-based cooking sauce from his family’s 60-year-old secret recipe. This was the humble beginnings of the world-renowned Yoshida’s Gourmet Sauce, launched in 1982, the first product in what would become a multimillion-dollar conglomerate.

“When I was a boy on the streets in my hometown in Japan, I would dream about going to America and becoming a businessman. And look where I am now,” Junki said. “But I could not have accomplished that without the help of so many, many people. In 1970, the door was opened for me at Highline.”

Linda agreed, “I know we would not have been able to accomplish what we have without our experiences in college.”

After graduating from Highline, Linda applied her writing and artistic skills to various business endeavors. But her love of modern-day literature never diminished. When her third child completed college, she pursued a professional writing career.

Her first novel, “Flaherty’s Crossing,” was awarded the Publisher’s Award of Excellence in 2010. In 2008, she was a finalist for the Romance Writers of America’s Golden Heart contest that promotes excellence in the romance genre. All told, she has earned more than a dozen literary awards under the pen name Kaylin McFarren.

Now their three children have children of their own. The Yoshidas remain busy with their careers and are active in their community, donating time and money to a number of causes and educational organizations throughout the Pacific Northwest.

Linda created the Soulful Giving Foundation, which works toward expanding research, care and treatment to cancer patients and their families. She has also served as the director of the Yoshida Fine Art Gallery and on numerous nonprofit boards and councils in Oregon.

Junki’s businesses continue to be as devoted to profits as they are to philanthropy. Local support and sustainability are core values at all Yoshida companies.

Giving back where it all began

Both Linda and Junki remain staunch supporters of Highline.

In June 2012, they donated a bronze sculpture to Highline in commemoration of the college’s 50th anniversary. Residing in the Student Union Building, the eight-foot-tall sculpture depicts a Native American warrior that represents pride, perseverance and overcoming obstacles. The sculpture, “Spirits Will Protect Me,” was created by Jim Jackson, a Portland artist and member of the Klamath Tribe of southern Oregon.

“It is our hope that visitors and students on campus are inspired by [the statue’s] powerful meaning and grow to love it as much as we do,” said Linda.

Junki knows all too well about overcoming obstacles and perseverance. He grew up poor, struggled with English as an immigrant in America and endured many business failures—including several near-bankruptcies—on his eventual road to success. He takes nothing for granted and it grateful for all the good that has come his way.

“Attending Highline provided me with so many opportunities, and as a karate instructor on campus, I learned the importance of leadership . . . a skill that I cherish in both my business and personal life to this day,” said Junki, who is now an eighth degree black belt.

As one of Highline’s first Japanese students, Junki helped the college open its first alumni chapter outside of the U.S. in Tokyo in November 2013. Junki is serving as chapter adviser and president. (International students from Japan make up the highest number of alumni from any country outside of the United States.)

Both Yoshidas were named Highline Distinguished Alum Award winners, Junki in 2003 and Linda in 2011. Started in 1990, the Distinguished Alumni Award honors former Highline students who have made outstanding contributions benefiting their profession, community or across the world.

Junki was also one of six recipients of the 2004 Outstanding Alumni Award from the American Association of Community Colleges, a national award recognizing community college alumni who have excelled in their field and given back to their community.

The Yoshidas continue to support Highline and community colleges in Oregon where they make their home because they know their contributions will touch many lives and make a difference for students.

“Community colleges are affordable, they allow students to explore different career paths and the best part is that students develop relationships with their instructors,” said Junki.

Learn more about Junki and The Yoshida Group at yoshidagroup.com. Linda’s award-winning books are at kaylinmcfarren.com.