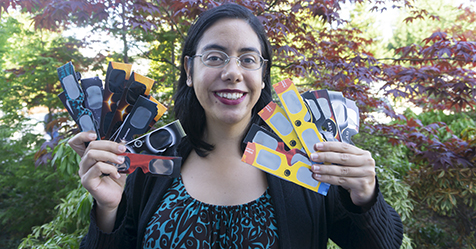 After discovering all local stores ran out of solar eclipse glasses, Highline College student worker Reina Godeck didn’t let this stop her from viewing the eclipse.

This act of kindness inspired Godeck to continue paying it forward. Since the moon passed over the sun, she’s been collecting solar eclipse glasses to donate to Astronomers Without Borders.

“After the eclipse, I did not want to just throw these fortuitous pair of glasses in the trash,” she said. “I researched if they could be re-purposed somehow, and I came to learn that Astronomers Without Borders was collecting solar eclipse glasses to be handed out free of charge at schools across South America and Southeast Asia at the next solar eclipse.”

She plans to mail all the glasses to Astronomers Without Borders Friday on her last day at Highline College.

Godeck recently graduated in June with her associate degree in business and received the Shirley B. Gordon Award for Academic Excellence.

“It would be really hard for me to quantify how much Highline has done for me, not only in terms of academic and financial support, but all the people making sure I was enrolled in the right classes and making progress, or made sure I had a clean and safe place to attend my classes,” she said. “If I am anything or anyone today, it is largely thanks to not only the community at Highline, but the surrounding one as well. Thus, it is my civic obligation, and my pleasure, to give back in whichever way I can.”

If you still have some spare solar eclipse glasses you’d like to donate, there is still time! Drop them off at the Highline College Human Resources department.

Godeck will transfer to the University of Washington Tacoma this fall to earn her bachelor’s degree in accounting.


Get Started At Highline