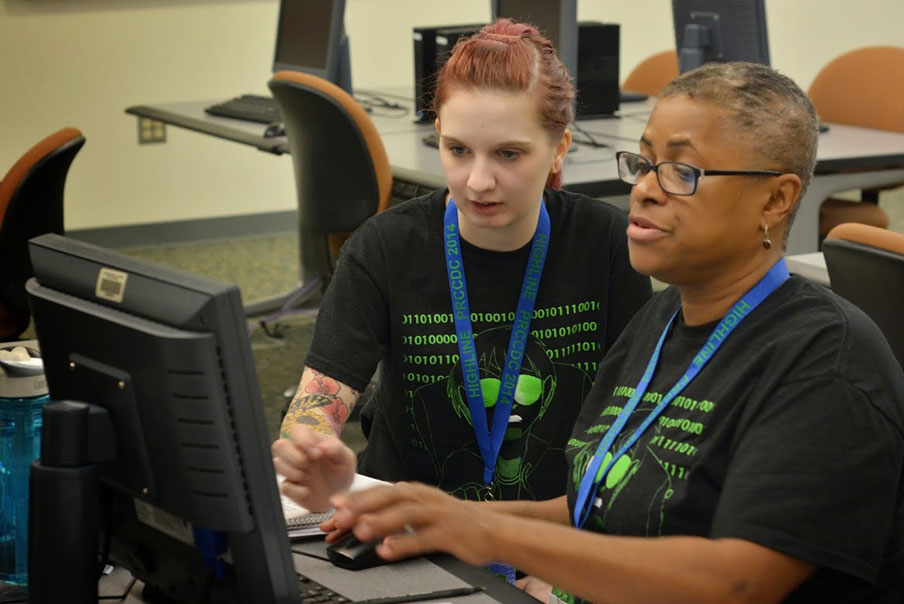 When Kelcie Wiley started taking classes at Highline College in 2011, little did she know what changes were in store, both for her and the college.

“Computers have always been my thing. I knew I wanted to do something with computers, so I started with a programming course,” says Wiley, who with her purplish hair and right arm covered in tattoos is hard to miss on campus.

“One day Amelia Phillips came to our class and talked about the Computer Information Systems program. It sounded better to me than programming, especially the data recovery and forensics courses she described,” says the 22-year-old Federal Way resident. “That sounded more like what I wanted to do. So I made the change to the CIS program and have been full time ever since.”

Now close to earning her applied associate degree, Wiley looks forward to continuing on at Highline to pursue an applied bachelor’s degree in Cybersecurity and Forensics, a new program at the college.

“I like that Highline’s offering a Cybersecurity and Forensics bachelor’s program because a lot of places have either a certificate or a master’s, not a bachelor’s,” says Wiley.

A lack of baccalaureate programs in Cybersecurity and Forensics is exactly why Highline created its applied bachelor’s degree program, which provides the third and fourth years of college work for people who have completed a two-year technical degree.

Cybersecurity and Forensics is one of four new applied bachelor’s degree programs offered by Highline. The others are Global Trade and Logistics, Respiratory Care and Youth Development.

Adding the applied bachelor’s degree programs is what prompted Highline to return to its original name of Highline College, another big change during Wiley’s time here.

When the change back to Highline College was announced, President Jack Bermingham said, “Students were at the core of the decision to change the name, as the community college title may disadvantage applied bachelor’s degree graduates in the job market.

“Changing the name will not change the mission,” he added. “Highline has, and will always be, an institution of higher education, focused on serving the educational needs of our local community.”

After graduating from Federal Way’s Decatur High School, Wiley took a class at a for-profit technical school, but it did not offer exactly what she was looking for. So, she changed direction and came to Highline because it is close to home. She has been impressed with her experience.

“I feel like it’s a really good program. I’ve had the chance to get involved in many ways, ways that I hadn’t expected,” says Wiley. “I talk with Amelia [Phillips] quite a bit. In April, four of us went to the Women in Cybersecurity Conference with Amelia in Nashville. And I’m close with my teammates in the Highline Cyber Defense Club.”

The club competed earlier this year in the 7th Annual Pacific Rim Collegiate Cyber Defense Competition (PRCCDC), which was held on Highline’s campus. Phillips is regional director of the event.

During the competition, college students from around the Pacific Northwest had the chance to flex their cyber muscles. The annual event provides students with real-world challenges while maintaining a corporate network that can’t be replicated in a typical classroom. This type of competitive practice gives students better training and preparation for the workforce.

“We had so many different sorts of people who were good at different things,” says Wiley of her teammates. “It was a great meshing of people and talents, which helped our team be competitive. And it was a fun learning opportunity.” The team placed fifth out of a field of 12, beating out several four-year colleges and universities.

Opportunity and open access have been hallmarks of the college since day one. With comprehensive community college programs—and now applied bachelor’s degrees—Highline continues to meet the needs of its ever-changing area and students like Wiley who stay close to home for their education.