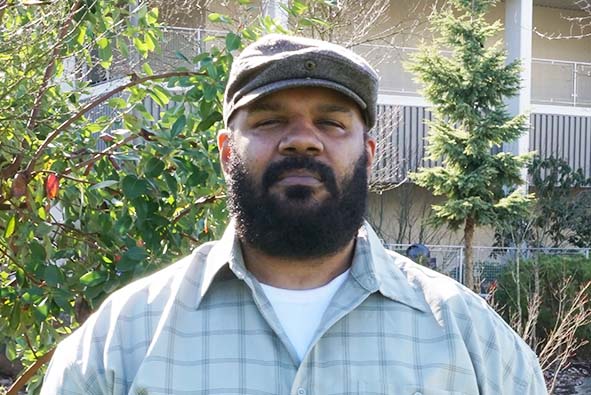 If you had one more chance, what would you do?

Given a second chance at a college education, John “JD” Jenkins is letting nothing get in his way, even a two-hour commute by bus during his first quarter at Highline College.

“There was nothing that would stop me from being here,” says Jenkins, who would wake at 5 a.m. and take four different buses from Lake Forest Park to make his 9 a.m. class.

Years earlier, Jenkins had attended college in Eastern Washington, where he was born and raised. There he played football, enjoying the camaraderie that comes with collegiate athletics. He did well academically, too.

But bad luck—including a car accident—and his own missteps—not being on top of repaying his student loans—nearly derailed his dreams of a college degree.

The car accident left him unable to play football.

“Football is a passionate undertaking,” says Jenkins, who needed something to fill the void. He ended up taking four jobs. While playing football, he did well academically. But with four jobs, he devoted much of his energy to work and his grades started to slip. He lost his federal financial aid and left school.

No Football, No Degree

All in all, he did well in the job market without his degree. He worked a few odd jobs until landing work in the corporate sector with positions such as junior network administrator at a software company. His career seemed to be taking off.

The financial collapse forced companies to cut back. Jenkins was laid off. And finding similar work did not happen. He was now competing against others who did have college degrees. He was back to doing odd jobs, doing nearly anything to pay the bills.

It got to the point where odd jobs were not enough. And his attempts to re-enter the workforce with the improving economy were not working. Not having finished college was holding him back.

He finally resorted to asking for help. He went to Washington’s Department of Social and Health Services (DSHS) for food stamps.

“Highline happened because an attentive associate at the DSHS office mentioned BFET. I thought there was no way for me to get back into college; BFET came out of nowhere,” says Jenkins. The BFET program—or Basic Food Employment and Training—is funded by DSHS.

During his first stint in college, he was a criminal justice major. Since then, he has discovered his love of all things technology related, and with his second chance at higher education, picked Highline in large part because of its computer science and computer information systems programs.

“After speaking with Amelia Phillips, and checking out the campus, I knew this was the place for me,” says Jenkins of his initial meeting with Dr. Amelia Phillips, who is a recognized expert in the field of digital forensics and a tenured faculty member at Highline.

Since he started at Highline, he has not missed a single class, not wanting to jeopardize his BFET funding.

Jenkins also credits Chun Yu, a Highline computer information systems instructor, for motivating him to make that two-hour commute during his first quarter.

“That man is so inspirational and so concise and clear. His methods are not like anybody else’s. It took me about three days to discover that I want to be him,” he says, laughing heartily, knowing that Yu would be embarrassed by Jenkins’ gushing.

“That first quarter, I followed his direction and guidance to the letter,” says Jenkins, adding that Yu’s teaching style gives him the confidence to know he can succeed.

Jenkins has enjoyed much success during his two years at Highline. Thanks to his perseverance and unwavering dedication, he made the President’s honor roll twice and has a 3.71 GPA.

He is quick to credit others for help along the way, beginning with the Workforce Education Services office, which was his first point of contact when he was referred by DSHS.

“They give you all the resources that you need and do a great job of supporting, of keeping in contact. Everyone in the WES office is capable and willing to help. That office is great.”

Jenkins is on track to finish his associate degree, with an emphasis in network security, after completing an internship during the summer of 2016. Now living in Des Moines, he will remain at Highline and enroll in the college’s new applied bachelor’s degree program in Cybersecurity and Forensics.

He plans on working while earning the degree—only one job this time—and taking advantage of the program’s accommodating schedule, with classes in the late afternoon and evening, designed for working adults.

As an African-American, Jenkins knows that people of color are underrepresented in technology fields.

“Especially as you get more specialized, with security and networking, there is a huge gap. I would say little to no representation. So that will be an exciting challenge. It will be interesting if nothing else.”

He does not see his color as a barrier to employment—and does not feel he has faced discrimination in the hiring process—instead relying on his confidence in being an asset to a company.

Ruminating over the challenges of being a person of color “is not a part of my story, because I am projecting something entirely different. Most of it is that once I prove to an employer that I can help them get to where they want to be—especially in a team environment, which is where I excel—then they will at least have to consider me.”

What Jenkins prefers to focus on is the advantages diversity brings to a workplace.

Jenkins has experienced the benefits of diversity at Highline, which has close to 70 percent students of color and approximately 120 languages spoken on campus, making it the most ethnically diverse institution of higher education in the state.

“Getting to know people from other countries and regions—Eastern Europe, the continent of Africa, the Middle East—is amazing. Some of the best conversations I’ve had have been with guys from Ukraine and Russia and a young woman from Pakistan.”

In fact, Jenkins interacts with faculty who have come from countries on four continents:

“You can read about how diverse Highline is, but until you walk on this campus, you are not going to understand it.”

“I am trying to think of an adjective worthy of describing the college’s diversity. ‘Awesome’ is not enough,” says Jenkins.