Graduating students, together with friends, family and Highline College staff and faculty, packed the ShoWare Center in Kent on June 15. Together, they celebrated during the college’s 2017 Commencement ceremony.

Before the ceremony got underway, graduating students shared advice for current and future Highline students.

Among the advice: ask questions, use campus resources and never give up. There were surprising suggestions, too, all of which can be viewed in the 4-minute video. Thank you to the 17 students who participated in the video.

Congratulations to the 37 students who earned bachelor’s degrees in 2017: 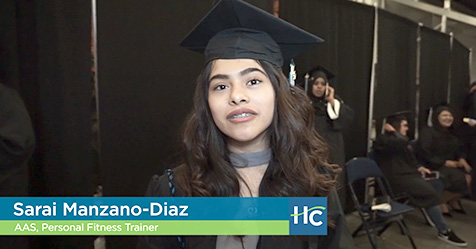 Watch behind-the-scenes footage as this year’s graduates offer advice on succeeding at Highline.

Close to 600 students participated in the ceremony, representing just a fraction of the students who graduated as part of the class of 2017. In addition to the 37 bachelor’s degrees awarded, students earned 1,608 associate degrees, 730 certificates and 196 high school equivalency diplomas. Some students earned more than one degree, certificate or diploma.

Graduates’ ages ranged from 17 to 79, with roughly 70 percent self-identifying as students of color. Nearly 350 identified as immigrants or refugees, 198 as international students and 39 as veterans.

A remarkable 705 students graduated with honors with GPAs of 3.5 and above. During the ceremony, 115 students — nine more than once — were recognized for their academic achievements with the following premier academic awards and honors:

One key component of commencement each year is choosing a student speaker. While many apply for the honor, only one is selected. This year, Ashley Nichole Lewis earned the honor.

Commencement is also a time to recognize the outstanding contributions of students to on-campus services and activities as well as outstanding scholastic achievement.

The Highest Scholastic Achievement Award is presented each commencement to the graduating student — or students — who has attained the highest GPA and who has completed all degree requirements by the end of the spring quarter of the academic year of graduation. At this year’s commencement, an unprecedented number of students — 37 in all — graduated with perfect 4.0 GPAs, qualifying them as Highest Scholastic Achievement scholars:

During the 2016–17 academic year, 18 students challenged themselves to graduate as Honors Scholars as part of their participation in Highline’s Honors Program. These students completed at least 25 to 30 honors option credits, depending upon their degree, all while maintaining a minimum 3.5 GPA. In addition, they showed their dedication to the campus community by serving as club and student government leaders, participating in service learning, and much more. Read about some of the graduates in the Honors Program 2016–17 newsletter.

Salome Munyaka was selected as the University of Washington Tacoma’s 2017 Next Step Scholarship recipient from Highline College. The scholarship provides up to $6,000 in support each academic year for two years, for a total value of $12,000. She will pursue her bachelor’s degree in business.

Reina X. Godeck won the Shirley B. Gordon Award for Academic Excellence. With a 4.0 GPA, Godeck earned a $4,000 scholarship for the 2017–2018 academic year. The award is based largely on academic achievement, but also considers the student’s community service activities and community college experience. Dr. Shirley B. Gordon was Highline’s president from 1976 to 1990. Godeck will study accounting at the University of Washington Tacoma in the fall.

A number of students received special recognition for their outstanding scholastic achievement to various programs on campus. Some students are graduating this year, while others will return next year:

The following were selected for special recognition for their outstanding contributions to on-campus services and activities. As with the scholastic achievement award winners, some students are graduating this year, while others will return next year:

Advice from Highline’s Graduating Class of 2017

Note: Students are listed in order of appearance.