During the fall of 2013, Highline College student Kendall Evans was asked a difficult question:

“Is this what Highline thinks of its POWs and MIAs?”

The question came from fellow student Nikolaos R. Hendrick while the two were looking at Highline’s Veterans Memorial Plaza. Both men had served in the U.S. Army. Created in 1968, the memorial was originally created to honor fallen members of the armed forces from Washington state. Over the years the memorial had become so overgrown with trees and bushes that the most visible part of the memorial was the black and white POW/MIA flag, which honors soldiers who were prisoners of war or missing in action.

Evans was sure that the hidden plaza was not the memorial to veterans that Highline had intended for POWs and MIAs or, for that matter, any member of the armed forces.

“Hendrick was missing in action for several days while deployed during a conflict in the Middle East. His comment struck a nerve with me, and I wanted to see what I could do to improve the memorial,” said Evans, who at the time was working on his associate degree. He has since earned his two-year degree and is pursuing an applied bachelor’s degree in human services at Highline.

Evans took the question to Jonathan Brown, Associate Dean of the Center for Leadership and Service at Highline College, who was quick to agree that improvements to the memorial needed to be done. 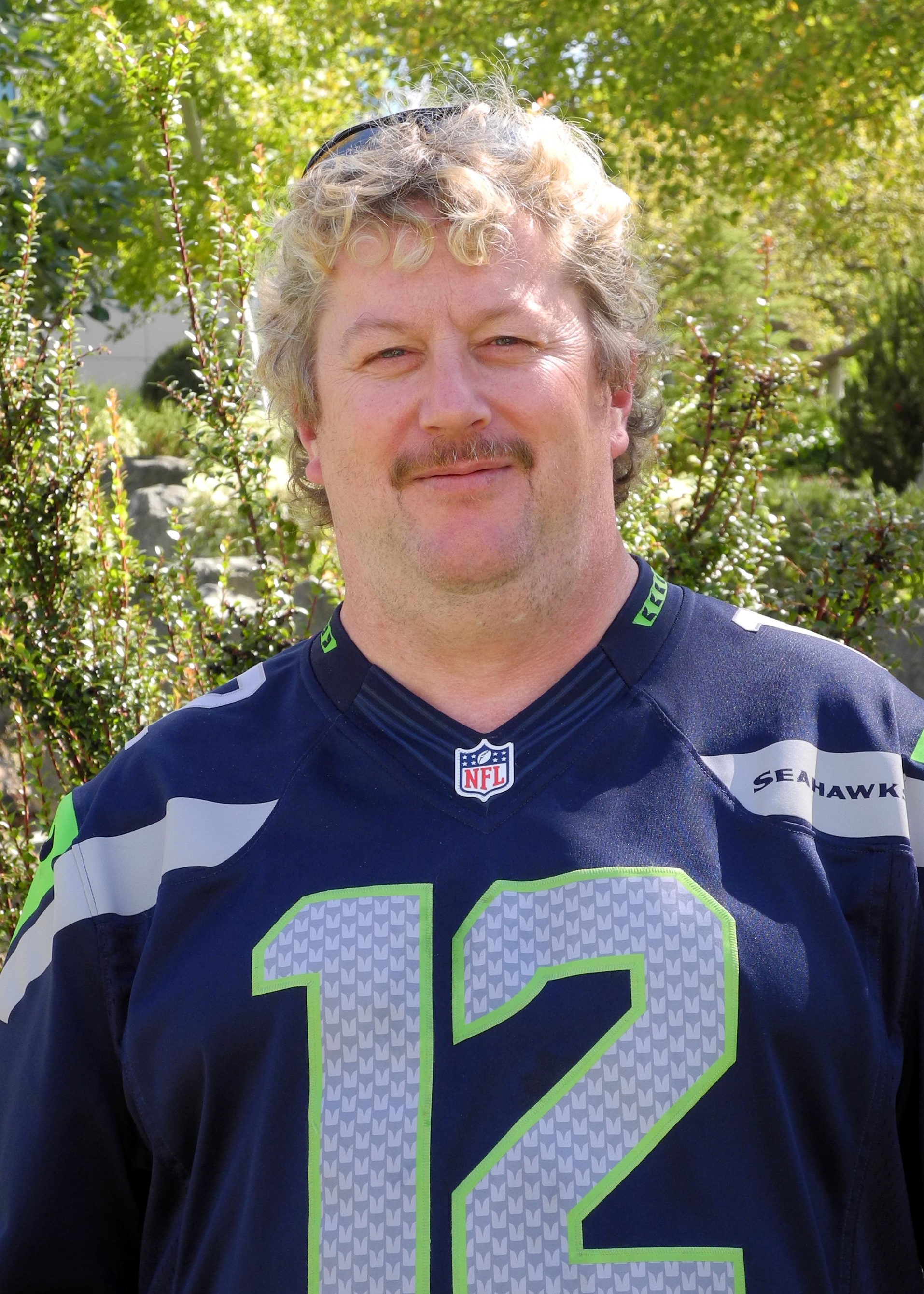 Evans and Brown sat down with Highline’s Director of Facilities and Operations, Barry Holldorf, who is also a veteran. Holldorf was on board with the idea that the current memorial was unacceptable. During the meeting he roughed out on a paper napkin the initial idea for the plaza redesign.

Holldorf’s idea was to re-create the look of a folded U.S. flag — the triangular-shaped flag given to a loved one to recognize a deceased veteran — into the concrete that serves as the base of the memorial. The folded flag of white stars on a blue background is surrounded by red and white stripes and anchors a low concrete wall inscribed with the words “Past, Present, Future.”

From the original napkin sketch, the design “was put on steroids by Jim Butler when we were conceptualizing the idea,” said Holldorf, referring to the lead architect on the project.

With the overwhelming support of Highline staff, including Veterans Services Program Manager Brian Galloway, Evans pursued the project with the assistance of Hendrick.

With a campus project of this type, getting it done requires an advocate, one who is willing to see the project from beginning to the very end. Evans did just that. From an informal conversation, Evans and Hendrick initiated the project. Evans then took the lead on the bulk of the project, on what turned out to be a multiyear process to bring a renovated veterans memorial to Highline’s campus.

The total cost of the project, which included design and construction, was $102,000, shared nearly equally by the Associated Students of Highline College and the college itself.

Highline will hold a free community-wide event to celebrate the renovated Veterans Memorial Plaza on October 6, 2015, at noon. Evans will be the master of ceremonies. 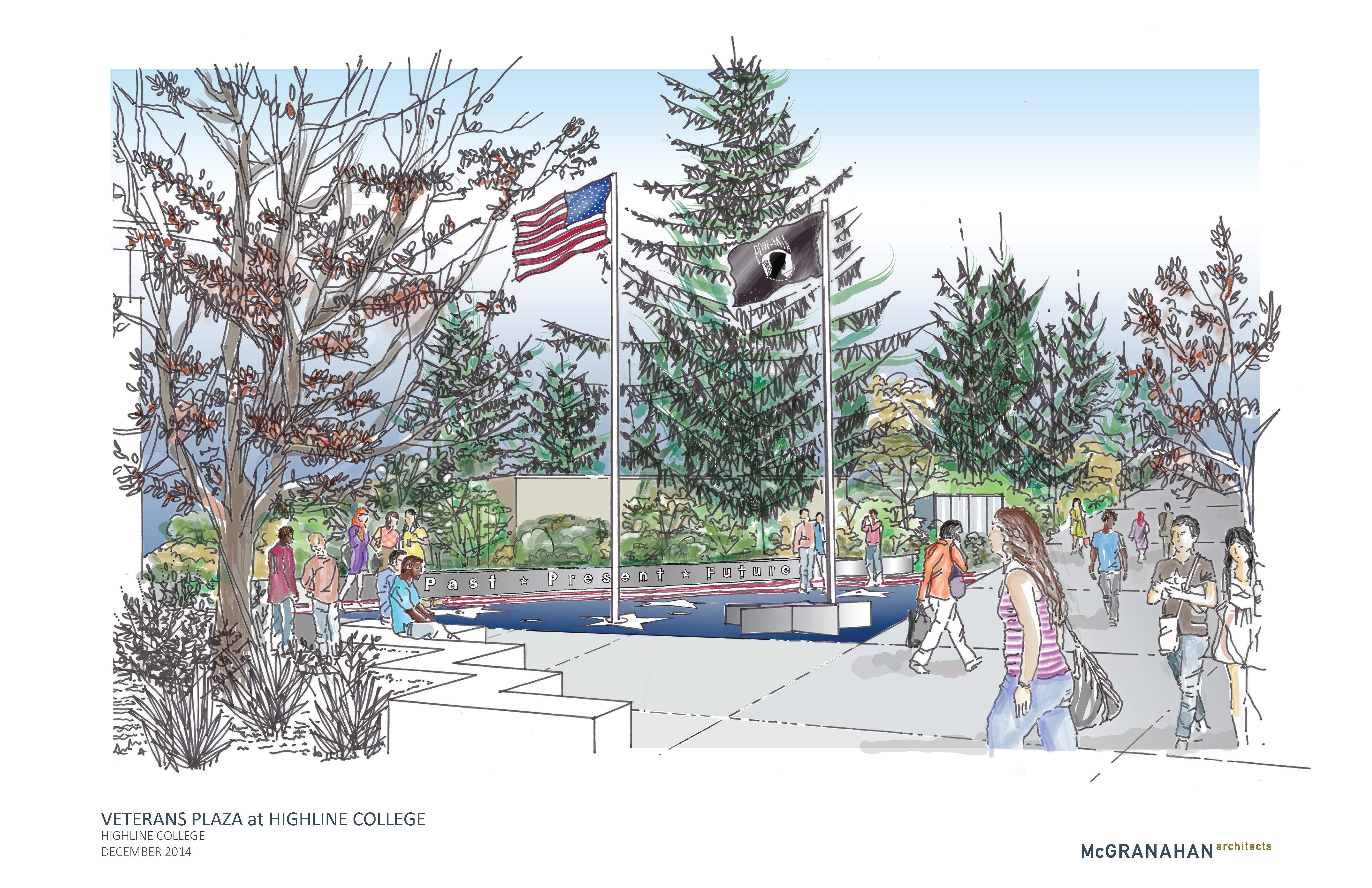 The event will include the color guard from Joint Base Lewis-McChord, a bagpipe performance of “Amazing Grace” by Highline alumnus Phillip Thelin, and a keynote address by Brenda Milewski. Milewski served in the U.S. Army from 1983 to 2008 and is now Vice President of the Washington State Women Veterans Advisory Committee for the Department of Veteran Affairs. A reception will follow the ceremony in Building 2 on Highline’s main campus.

The plaza, which is situated at the heart of campus, now opens wide to a prominent walking path, ensuring it will not become overgrown with foliage. The POW/MIA flag will continue to fly daily alongside the U.S. flag. The plaza’s redesign makes the words on the black and white flag — “You are not forgotten” — ring true again on Highline’s campus.

Highline serves approximately 200 veterans each quarter through its Veterans Services office, which helps veterans take advantage of government benefits for education, namely the GI Bill. Other veterans are believed to take classes on campus, but Highline tracks only those who use services through its Veterans Services office. Veterans on Highline’s campus match the diversity of its general student population with 70 percent students of color. Highline ranks as the most diverse higher education institution in the state of Washington.