The two were honored as members of the 2017 All-Washington Academic Team for their academic achievement, community service and involvement on campus.

Abramchuk, Munyaka and other top scholars from the state’s 34 community and technical colleges attended today’s awards ceremony at South Puget Sound Community College in Olympia. Each college could nominate up to two students for the award. To qualify, students must be members of the Phi Theta Kappa Honor Society.

With the recognition, Abramchuk and Munyaka have each earned $500 in scholarships: $250 given by KeyBank and $250 by the Highline College Foundation.

“Highline is extremely proud of our All-Washington scholars, Ms. Abramchuk and Ms. Munyaka. Their achievements both as scholars and as engaged campus leaders provide inspiring testimony of how our community’s immigrants and immigrant families contribute to the greater good of the whole region. As a community college, it gives us great satisfaction to support their efforts and their success,” said Dr. Teri Balkenende, history instructor and Phi Theta Kappa adviser at Highline.

Born in Belarus, Karina Abramchuk earned her associate degree and high school diploma simultaneously as a Running Start student while working as a tutor in the college’s Writing Center and volunteering in her church and on campus.

Fluent in Russian, Spanish and English, she is a five-time President’s Honor Roll student whose goal is to be an international consultant where she can bring invaluable knowledge of the world’s rich diversity, having been immersed in it while at Highline.

The 19-year-old continues to take classes at Highline and plans to transfer to the University of Washington (Seattle campus) to study business in the fall of 2017. She has a 3.97 GPA.

Abramchuk came to the U.S. as an infant with her parents and has lived in Federal Way for close to 10 years. She and her family Skype weekly with relatives in Belarus, and she is planning her first trip to the country this summer. 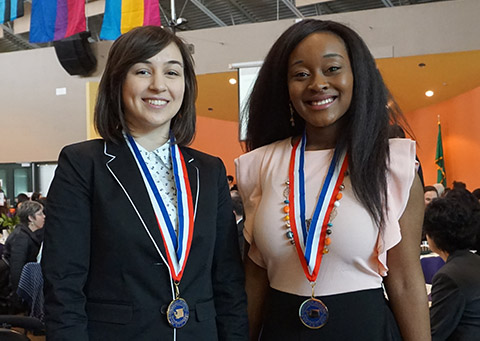 An asylum-seeker from Kenya, Salome Munyaka, 23, was inspired to pursue her education after witnessing women in her former village struggle to run businesses without training. Like Abramchuk, she will also pursue her bachelor’s degree in business.

She holds a 3.57 GPA and is a three-time President’s Honor Roll student.

Her call to community service is deeply personal, having firsthand experience with homelessness, hunger and domestic abuse. She believes helping others could save them from giving up. In addition to many volunteer activities off campus, she serves as an officer in both Highline’s chapter of Phi Theta Kappa and the student-run African Students Association club. She also participates in the Umoja program, a Highline learning community.

Munyaka moved to the U.S. just over a year ago, December 2015, and settled in Federal Way. She is fluent in five languages: English, Swahili and various tribal languages.

In September 2016, she was crowned First Princess in the Miss Africa Washington State pageant. The honor gives her a platform to speak out against domestic violence.

She was recently named the most influential community youth leader in the Pacific Northwest by the Kenyan embassy in Washington, D.C.