Graduating students, together with friends, family and Highline College staff and faculty, packed the ShoWare Center in Kent on June 14. Together, they celebrated during the college’s 2018 Commencement ceremony.

Close to 650 students participated in the ceremony, representing just a fraction of those who graduated as part of the class of 2018. Students earned 56 applied bachelor’s degrees, nearly 1,400 associate degrees, 458 certificates and 133 diplomas. Some students earned more than one degree or certificate.


Hear from 1972 graduate Samuel Green on his recent honor and Highline years.
The 2018 graduating class has roughly two-thirds women, two-thirds students of color and students ranging in age from 17 to 70. Graduates include 255 immigrants and 42 veterans.

Among the graduates are those from four of the college’s five applied bachelor’s degree programs: Cybersecurity and Forensics, Global Trade and Logistics, Respiratory Care, and Youth Development.

In fall 2018, Highline added an applied bachelor’s degree in Teaching and Early Learning, so the first cohort of students will be graduating in 2019.

Congratulations to the 56 students who earned bachelor’s degrees in 2018:

One key component of Commencement each year is choosing a student speaker. While many apply, only one is selected. This year, Haley Antoinette Cummins earned the honor.

Cummins earned an associate degree with an emphasis in sociology. While at Highline, she had been involved in numerous programs and campus communities, including Umoja Black Scholars, Phi Theta Kappa, Honors Program, Center for Leadership and Service, Writing Center and various volunteer opportunities. She considers the Highline community her family, and says that Highline has been a pivotal experience in her life journey. She intends to pursue a degree in sociology and criminal law at the University of Washington.

During the ceremony, a number of students were recognized for their academic achievements with the following premier academic awards and honors:

Commencement is also a time to recognize the Student Legacy Award winners. These awards are open to all students, not just those graduating.

Phong Ly and Valerie Saylor earned statewide recognition for their accomplishments as Highline College students. The two were named to the 2018 All-Washington Academic Team for their academic achievement, community service and involvement on campus. As part of the annual recognition, up to four members from each of the state’s 34 community and technical colleges earn scholarships and recognition for their achievements. During the March 22 awards ceremony, Ly was named as one of the top six students statewide among the 78 recognized.

The Highest Scholastic Achievement Award is presented each commencement to the graduating student — or students — who has attained the highest GPA and who has completed all degree requirements by the end of the spring quarter of the academic year of graduation. At this year’s commencement, 29 graduated with perfect 4.0 GPAs, qualifying them as Highest Scholastic Achievement scholars:

During the 2017–18 academic year, 21 students challenged themselves to graduate as Honors Scholars as part of their participation in Highline’s Honors Program. These students completed at least 25 to 30 honors option credits, depending upon their degree, all while maintaining a minimum 3.5 GPA. In addition, they showed their dedication to the campus community by serving as club and student government leaders, participating in service learning, and much more:

Erica Juarez-Ramos was selected as the University of Washington Tacoma’s 2018 Next Step Scholarship recipient from Highline College. The scholarship provides up to $6,000 in support each academic year for two years, for a total value of $12,000.

Honglin Chen won the Shirley B. Gordon Award for Academic Excellence, awarded annually by the Highline College Foundation. Chen earned a $4,000 scholarship for the 2018–2019 academic year. The award is based largely on academic achievement, but also considers the student’s community service activities and community college experience. Dr. Shirley B. Gordon was Highline’s president from 1976 to 1990.

A number of students received recognition for high achievement and contributions to campus programs, services and activities. While some of these students are graduating this year, others will return. This year, 64 scholars and leaders took home 69 awards, with four students winning in two or more categories. They were honored during a special May 23 ceremony on campus as well as being listed in the Commencement program. See the list of winners in “64 Students Celebrated for Their Legacies.”

Samuel Green (Highline class of ’72) recently gave the Commencement address to the graduate school class of 2018 of Seattle University, at which time he was awarded a Doctor of Humane Letters (honoris causa), honoring not only his contributions as a visiting professor for Seattle University over the past 17 years, but also for his poetry, his term as Washington’s first Poet Laureate in 2007, and more than 40 years’ work in public school classrooms.

Green said, “I still think of my time at Highline as a transformative experience in my life. Though I went on to get a bachelor’s degree and master’s degree at Western Washington University, it was Highline that first took me in when it seemed I had no other place to go, and gave me the skills and confidence to move forward. Two-year schools fill one of the most vital needs in education: giving second chances. It certainly did that for me. I was honored by the Distinguished Alumnus Award back in 2008, and it remains one of my most treasured experiences.” 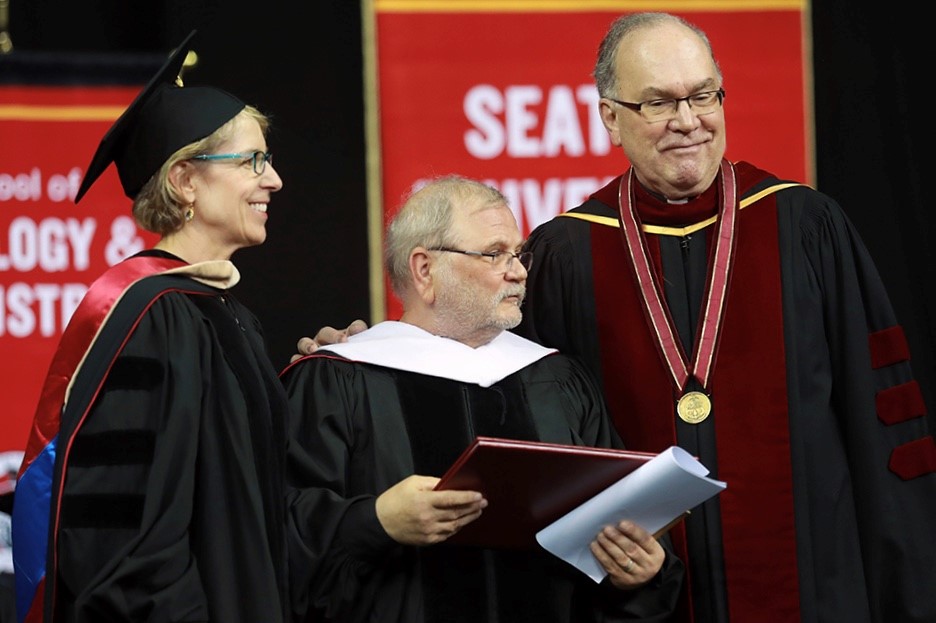