Phong Ly and Valerie Saylor earned statewide recognition for their accomplishments as Highline College students. The two were honored as members of the 2018 All-Washington Academic Team for their academic achievement, community service and involvement on campus.

Ly, Saylor and other top scholars from the state’s 34 community and technical colleges attended the March 22 awards ceremony at South Puget Sound Community College in Olympia.

During the event, Ly was named as one of the top six students statewide among the 78 recognized. The honor comes with a $1,000 scholarship from Washington State Employees Credit Union.

Each college could nominate up to four students for the award. To qualify, students must be members of the Phi Theta Kappa Honor Society.

By being named to the All-Washington team, Ly and Saylor have each earned $500 in scholarships: $250 given by KeyBank and $250 by the Highline College Foundation.


“We are very proud of our All-Washington scholars. Both Phong and Valerie have had to overcome a lot of challenges along the way, but their curiosity and commitment to their academic goals have seen them through. Their achievements really are inspiring.”

As an international student from a middle class family in Vietnam, Ly chose Highline for its affordability. Cost was also a factor after a 2015 storm in his homeland caused great damage to his family’s house.

“My family almost lost everything in that storm. We have been living frugally for years in order to make up for the loss.”

“I spent many evenings at the Physics lab with the help of my professor to build many prototypes, which I would not be able to do in a class of 300 to 400 students at large university.”

When he graduates in June, he will have earned associate degrees in both engineering and physics. His goal is to become a computer engineer after studying at the University of Washington.

Outside of the classroom, Ly volunteers with Highline’s chapter of Phi Theta Kappa, serving as president. He headed up the chapter’s annual food drive this past fall. He also works as lead tutor in the college’s Math Resource Center and spends time taking care of an elderly relative. 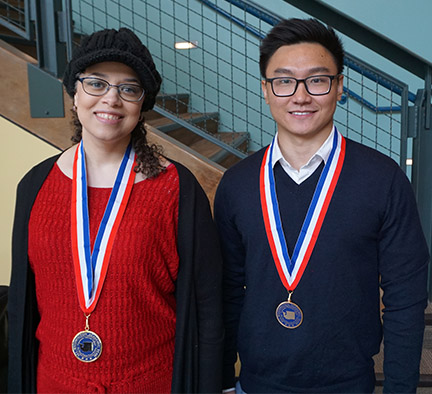 For Valerie Saylor, 37, the journey to college was long and challenging. But her passion for physical science stuck with her.

Saylor struggled in high school, likely due to depression and ADHD, which went untreated until her late 20s.

Saylor did not let her diagnosis or financial hardship keep her from her educational dreams.

When she enrolled part-time at Highline College in 2013, she worked tirelessly to follow her lifelong goal of studying physics and astronomy.

“These topics have been passions of mine since I was 14,” she says, “and they are what I’ve held to in my most challenging personal moments.”

She holds a 3.82 GPA, reflecting her hard work.

Her volunteer efforts include serving as fellowship officer with the college’s PTK chapter, where she organizes social events for the group, and, like Ly, she participated in the chapter’s annual food drive. She also helped educate Highline students on the problems faced by refugees through the chapter’s Refugee Simulation event.

She plans to transfer to the University of Washington in the fall with the goal of earning a doctorate.

Saylor is a lifelong resident of Des Moines.