Highline College and University of Washington students recently came together to not only build an analog heart rate monitor from scratch in a virtual environment, but they put in motion a solution to help students of color gain a competitive edge when pursuing STEM education.

In February 2021, the University of Washington’s student-led STEM group AVELA (A Vision for Electronic Literacy & Access), which is made up of underrepresented students, reached out to Highline’s MESA (Mathematics, Engineering, Science Achievement) program to inquire about a mentorship opportunity.

“Having the AVELA student leaders lead STEM-based projects assists with helping first-generation students who come from the same environments and backgrounds as they do, which creates a common bond and builds community,” Kuzu said. 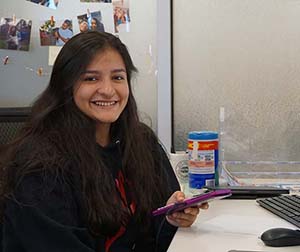 MESA students get personalized success plans when they become members.

MESA already has a goal to help underrepresented, first-generation and/or undocumented students as well as those who are at an economic disadvantage pursue their STEM education. Whether that be through academic and personal support, financial aid and transfer advising help or professional development opportunities, each MESA student is given a personalized success plan. So, further connecting MESA students with students who had already navigated the university system was an opportunity that couldn’t be passed up.

By the end of summer 2021, the groups had spent six weeks together on the analog heart rate monitor project.

“There was added motivation for this project, namely because of the current health climate (global pandemic), as well as a common curiosity to explore ‘analog electronics’ further,” said Hussein, who is a current University of Washington graduate student studying to get his Ph.D. in electrical engineering with a focus on developing medical devices and circuits using integrated photonics.

Hussein explained that the way the monitor works is through a circuit that monitors one’s heart rate using conventional electronics free of any digital components.

“In other words, there’s no need for a liquid crystal display (LCD) or screen to ‘read’ your heartrate –– this is achieved through the use of complementary electronics and one’s finger to power a light-emitting diode (LED) indicating each heartbeat,” he said.

The total cost is $10 to make one, making it an attractive and practical option for third-world areas.

Anh Huy Lam, a Highline College MESA student who is studying mechanical engineering, said he loved working on the project. 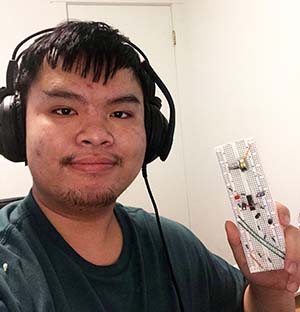 MESA student Anh Huy Lam with the analog heart rate monitor he worked on over the summer.

“In the last few weeks of the project, I actively opened my webcam to show my work,” he said. “I think that helped a lot in doing the project because everyone saw what I was doing. The project was useful for me –- that was my first time learning about those components and new knowledge.”

Lam hopes to graduate from Highline in June 2022 and transfer to the University of Washington before pursuing a career as a robotics engineer.

“Ironman inspires me to become an engineer, after all,” Lam said, noting through this project, it was his first opportunity to “touch an actual circuit,” and he hopes more projects like this will be available for MESA students in the future.

Highline students aren’t the first AVELA has worked with on projects like this. The UW group has been mentoring high school students across the state since 2019.

“AVELA aims to bridge the opportunity gap currently present in the public education system by increasing minority participation in STEM by providing workshops, classes, panels and tutoring K-14 students from minority backgrounds,” said AVELA’s co-founder Kyle Johnson, who is currently a University of Washington student studying to complete his Ph.D. in computer science and engineering. “Offering young students exposure to STEM fields, technical experience and mentorship will allow them to hit the ground running at a community college, university and/or in industry.” 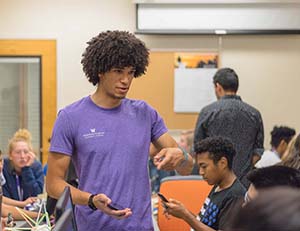 Johnson said that in 2019 the UW’s College of Engineering changed their admissions process to a “direct to college” model, which made the application process more competitive for high school and transfer students. Johnson, who got into his major through the college’s old process, said he had an advantage because he was able to use the many resources available to beef up his resume.

“I joined a research lab, became the web developer for the UW’s Student Technology Fee program, became one of the inaugural LSAMP (Louis Stokes Alliance for Minority Participation) ambassadors, joined NSBE (National Society of Black Engineers) and more,” the Seattle resident said. “I was not directly admitted into an engineering program, but the old model allowed students who did not have as much access to engineering opportunities during high school to build those skills when they got to UW.”

Johnson said this application process change led to a decrease in admittances of Black/African American, Native American, Hispanic and Pacific Islander students into the College of Engineering.

“Without enough funding, support or energy being spent to combat this problem from the college level, AVELA was started in an attempt for students to try and solve this problem instead of waiting around for someone else to address our issues,” Johnson said.

By working with underrepresented minority high school or community college transfer students on projects such as the analog heart rate monitor, it gives those students one more bullet point of experience to add to their college application, resume or personal website.

Creating STEM opportunities for underrepresented minority students, which include Black/African American, American Indian/Native American, Hispanic and Hawaiian/Pacific Islander ethnicities, is beyond a top priority of MESA and AVELA.

By 2030, Washington STEM, a statewide education nonprofit, estimates “87% of high-demand, family-sustaining wage jobs available in [King County] will require a postsecondary degree or credential” and “67% of those jobs will be STEM or STEM literacy-based occupations.” Yet, as of April 2021, the nonprofit reported only 52% of high school graduates from 2018 were expected to obtain a college degree with less pursuing STEM degrees and even fewer of those graduates identifying as women or students of color.

But because STEM careers tend to pay higher, six-figure salaries, creating access and opportunity to Washington’s diverse student population is more important than ever before.

While progress is being made state and countywide, closing the skills gap takes innovative solutions, such as the MESA and AVELA partnership, to continue to advance equity in STEM.