The SeaTac resident was one of 69 student writers who submitted 133 poems during the contest, which spanned over the course of fall and winter quarters as well as during the COVID-19 pandemic, when a majority of learning has been done remotely.

Wells, who won the top prize of $200, wrote about something most writers struggle with at some point in their journey, yet may not always write about –– the quality of her work.

“The poem turned out to be very meta, but as I was writing it, I was deep in concentration about how it feels when you are writing a trash poem,” Wells, 40, said. “I know that I am my own worst critic, so with everything that I write afterwards, I wonder: did this poem do what I wanted it to?”

Wells was prompted to pen the poem in a writing workshop held by a writer she admires. But because the workshop was reoccurring and was attended by several slam poets she admires, she said the prompt put her “imposter syndrome on high alert.”

“My mind was racing as the timer winded down and, yes, I was terrified of having to share nothing with these writers I respected and admired,” she said. “So, I said forget it and just wrote my frustrations instead, so that I would have something to share. ‘Decasia’ is what came out.”

For those who aren’t familiar with the film “Decasia,” which is what Wells’ poem is named after, it’s a 2002 movie about decaying film.

“As a film buff, I loved the movie and the idea of making art from rotten art,” she said.

But the irony of winning the contest is not lost on her.

“It’s funny because this poem knew that it was good.” Wells said. “It knew that it would be meta and critical of the craft but the whole time I was writing it, even up to the point of submitting it, I wasn’t quite sure. Part of my process is writing the poem, letting it out into the world and then acknowledging, ‘Okay that poem knew what it was doing the whole time, even if I didn’t’.”

After some extra credit incentives from Susan Rich, her creative writing instructor, and encouragement by Josh Gidding, her English 101 instructor, Wells took a chance and submitted her poem.

“To be honest, I am not sure I would have submitted anything without their encouragement,” Wells said. “I love to write but it’s been hard to see myself as a writer until I started at Highline.”

Although Wells just began at Highline this year, she intends to attain her associate degree, transfer for her bachelor’s and eventually get a Master of Fine Arts in creative writing.

“The Poetry Contest committee was unanimous in choosing this poem for first place,” said Deborah Moore, a reference librarian at Highline College and member of the college’s Poetry Contest Committee. “The committee loved Patheresa’s wonderful use of language and images, and we found the tone of this poem to be strong and consistent.”

Second place, with a prize of $150, went to Arrionna Chinel of Bothell for “My Truth.” And third place and $100 went to Kiera Golden for “Journal Pages.” Golden recently moved to Phillipsburg, Montana.

Each year, judges pour through dozens of submissions, looking for one poem that merits first place in Highline’s annual contest. Here are the winning entries from the past several years:

The contest required students to submit poems that were no more than 20 lines and limited the poet to three submissions. In addition to cash prizes, each student will be celebrated during National Poetry Month in April at a virtual reception on Tuesday, April 28.

The students’ poems are among those of published poets Jericho Brown, Geraldine Mills and Naomi Shihab Nye.

To read the poems and watch videos of the student poets reading their poems, visit Highline’s National Poetry Month blog. 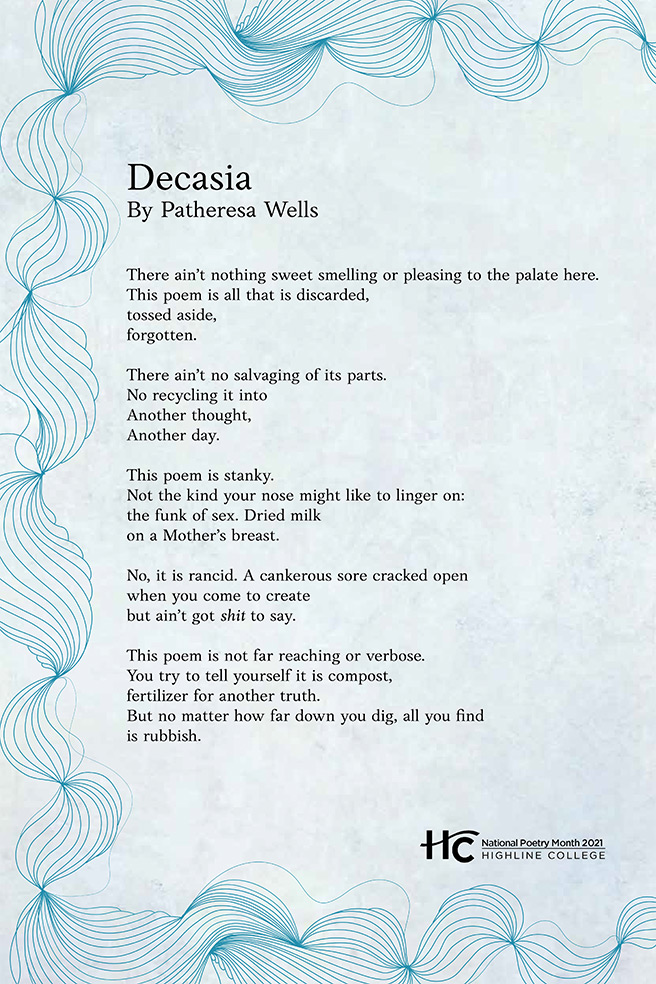 There ain’t nothing sweet smelling or pleasing to the palate here.
This poem is all that is discarded,
tossed aside,
forgotten.

There ain’t no salvaging of its parts.
No recycling it into
Another thought,
Another day.

This poem is stanky.
Not the kind your nose might like to linger on:
the funk of sex. Dried milk
on a Mother’s breast.

No, it is rancid. A cankerous sore cracked open
when you come to create
but ain’t got shit to say.

This poem is not far reaching or verbose.
You try to tell yourself it is compost,
fertilizer for another truth.
But no matter how far down you dig, all you find
is rubbish.