Nathan Yockey’s poem “Dead Light Switch” won first place in Highline College’s 2020 Student Poetry Contest. The Des Moines resident was one of 51 student writers who submitted 101 poems during the contest, which spanned over the course of fall and winter quarters.

Yockey said his poem was inspired by his family’s humble beginnings of living in a trailer in a small logging and fishing community in Coffman Cove, Alaska.

A gift from his mom’s friend, the trailer came to Yockey and his family in poor condition. But as his parents earned more money, they began to renovate it and turn the trailer into a home.

“The one thing my parents didn’t fix was this light switch by the door, so it’s kind of representative of the growth, but at the same time, a reminder of the humble beginnings,” Yockey said, noting he never realized his family went without as his parents always made sure his needs were met. “Looking back, it really makes me appreciate them because I didn’t understand how little we had.”

Yockey, a second-year student who plans to graduate in June 2020 with an associate degree, hopes to study psychology at a university that would fit within his basketball career. After his bachelor’s degree, Yockey said he’ll either pursue his master’s or doctorate in psychology before possibly getting a job in the field.

So how did a basketball player studying psychology get into poetry?

“She saw my strengths as a writer and pushed me to do more and expand my writing –– to branch out to new and different stuff,” Yockey said.

Second place, with a prize of $150, went to Jiro-Emilio Jones of Burien for “Bodies.”

Third place and $100 went to Nikelle Price for “Aboard the Hawaiian Airlines.” Price is originally from Idaho but is staying in Des Moines for college.

Each year, judges pour through dozens of submissions, looking for one poem that merits first place in Highline’s annual contest. Here are the winning entries from the past several years:

The contest required students to submit poems that were no more than 20 lines and could fit onto an 8 1/2-by-11-inch piece of paper.

The students’ poems are among those of published poets Jericho Brown, Geraldine Mills and Naomi Shihab Nye. 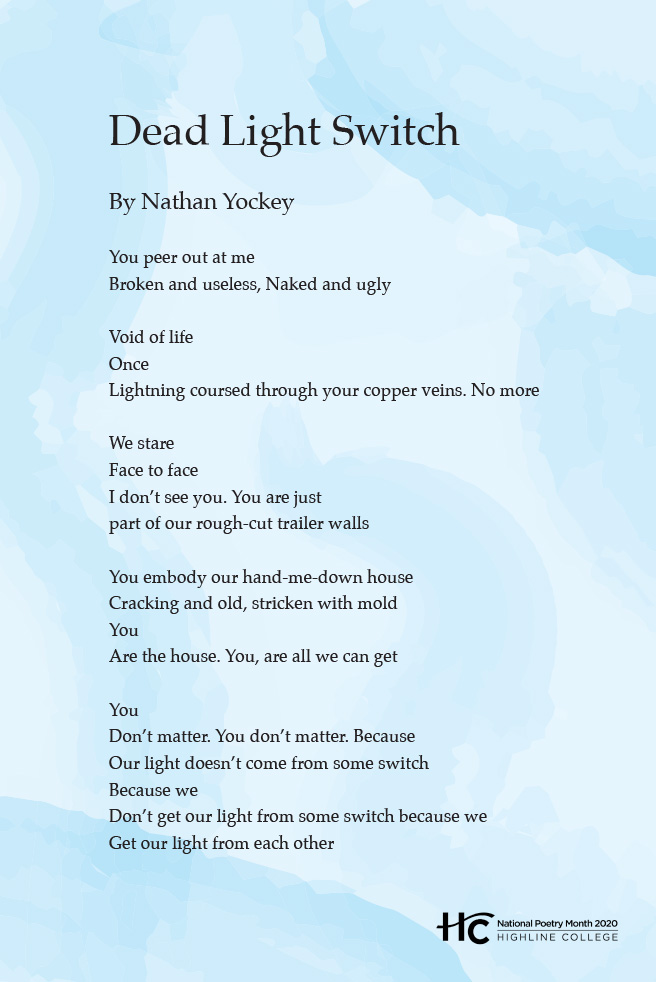 You peer out at me
Broken and useless, Naked and ugly

Void of life
Once
Lightning coursed through your copper veins. No more

We stare
Face to face
I don’t see you. You are just
part of our rough-cut trailer walls

You embody our hand-me-down house
Cracking and old, stricken with mold
You
Are the house. You, are all we can get