In collaboration with Native artist Louie Gong, Highline College has created a new Thunderbird logo as an alternative to its 20-year-old predecessor.

The Thunderbird is of great importance to many Coast Salish tribes in the Pacific Northwest and is a mythological creature in Native history. It is known for representing power, protection and strength. Highline College sits on Duwamish land, one of many tribes that make up the Coast Salish people.

“I always say that cultural art is like any natural resource,” Gong said. “We have to be stewards of it if we want it to thrive. Highline’s interest in working with a Native artist to create a Coast Salish-based logo image is a strong step towards stewardship, so I was very excited to receive the inquiry.”

Gong is a Nooksack tribal member and founded Eighth Generation, a Native-owned and operated company in Seattle.

He said the main feature that distinguishes a Thunderbird from other birds is its plume.

“I chose to zoom in on the head of the Thunderbird because that’s where the plume is located,” he said. “Taking this approach also provided opportunities to highlight traditional shapes, like the crescent, that are indicative of Coast Salish art.”

While Gong created the Thunderbird logo art, Highline’s design team created a variety of optional support text that can accompany the logo, depending on how it’s used and where it’s placed. 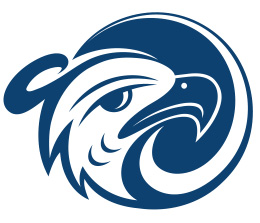 Example of new Thunderbird logo in one color.

Tanya Powers, Highline’s associate dean of workforce and baccalaureate education, connected Tony Johnson, director of marketing, design and production, and senior graphic designer Kelly Wong with Gong and they began working together on the new logo.

“The issue that came up with Highline is an issue that comes up across a lot of places, even with sports teams,” Powers said. “Native symbology is used but it wasn’t actually created by Native folks and then becomes a form of cultural appropriation.”

She said one of the reasons she appreciates Gong’s work is that he takes a contemporary perspective to design.

“Oftentimes with art and design in Native culture, dominant culture wants static representations of art,” Powers said. “And, so, Louie takes a very modern approach to Native art. It’s a fresh perspective on the Thunderbird.”

This alternative Thunderbird logo will slowly replace the previous version of the logo on items in the bookstore, such as clothing, posters, pennants or other merchandise, and in various marketing materials. However, its use is optional.

The Highline College logo, not to be confused with the Thunderbird logo, was created in 2014 as the result of our name change from Highline Community College to Highline College. It remains unchanged.