If Sofiya Yakubovskaya were living in Russia today, her tattoos would peg her as a criminal.

Since moving to the U.S. with her family in 1999, the 25-year-old Highline College student has acquired seven tattoos.

“In Russian culture, it’s been ingrained into our brains to believe that only criminals get tattoos,” said Yakubovskaya, who has lived in Federal Way since 2001. “Other cultures are not that way.”

A former tattoo apprentice, Yakubovskaya is working part time as an assistant in the college’s new Student Art Gallery, which is set to open in October with its debut exhibition, “Tattoo Stories.” Yakubovskaya hopes the upcoming exhibition of tattoo art will change some people’s perceptions of tattoos.

“I get a lot of looks of disapproval—usually from the elderly—when they see my tattoos. Other times, total strangers have complimented me on them,” she said. “In the past, there have been a few people who told me my tattoos make me less attractive. It’s hurtful, but in the end, I love my work.” 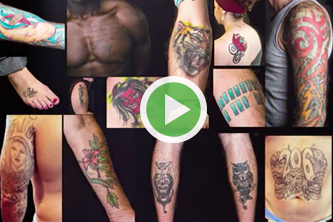 With her tattoos covered, Yakubovskaya could easily be mistaken for a model or actress. But when she exposes her tattoos, while not viewed as a criminal, she is also not viewed as the soft spoken, gentle soul that she is. Her favorite tattoo, located on her right forearm, features a mermaid drawn in a Japanese style.

“It’s probably my favorite because it’s the most colorful, even though I love black and gray. I love the theme because I’ve always liked mermaids. I can’t say that my tattoos are super significant, in terms of their meanings. Mostly I chose them because they would look pretty on the body.”

Most of the time she covers up her tattoos so as not to attract negative attention.

“It would be nice if people were more accepting of my tattoos, but I can’t change the way a person thinks. People judge, and I understand that. But it’s a bit unfortunate. I can only encourage them in the right direction and influence them a little bit. And I hope that the exhibit will show people that it is an art form.”

Tattoo Stories is a curated exhibit. Highline students, staff and faculty submitted descriptions and photos of their tattoos. A selection committee chose 25 finalists to be displayed during the show based on artistic merit, cultural significance and other factors. 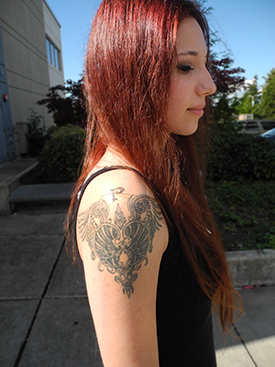 Sofiya Yakubovskaya is emotionally attached to a tattoo symbolizing her friend’s death. Located on her upper right arm, the tattoo includes “P” for Pamela, a heart for love and gothic wings symbolizing the flight of her friend leaving this world.

Each of the 25 tattoos featured will be shown in professional photographs mounted on the gallery walls, accompanied by a short story describing the tattoo’s significance to the wearer.

Also included in the exhibit will be information about and ideas around body image related to tattoos, put together by Highline’s Counseling Center and Psychology department.

Yakubovskaya feels that the art displayed as tattoos comes across as more accessible for people who are not traditional art patrons.

“I think it’s a good way to bring other students in because many have tattoos. It’s a way to get more people to participate and get involved in the art world. Tattoos are not fine art, but they are art. It’s an ancient art.”

Being closely involved with the new art gallery and this exhibit is a perfect fit for Yakubovskaya.

“I love art and always have. When I was 18, I wanted to be a tattoo artist, but it’s not the most stable job for most people. After I had my daughter, I knew I really needed to pick up my life and get things on track. That’s when I decided to go to Highline.”

She plans on graduating from Highline in spring of 2016 and transferring to the University of Washington to earn her bachelor’s degree in psychology, a subject she fell in love with during her first quarter on campus.

Being able to work in the gallery gives her the chance to indulge her first love—that of art—while working on her degree and caring for her 3-year-old daughter.

“I want more people to appreciate art because I think it’s a huge part of our lives and I don’t think people realize it. It surrounds us, from the clothes we wear to the buildings we’re in.”

Highline’s new gallery space in Building 16 will showcase art by the college’s students. The Tattoo Stories exhibit will be on display through November 12, followed later in the month with work by students in the college’s Art and Design program.