Whether you are paid six figures to find oil for the production of gasoline or you are working to save the planet by cleaning up the environment, there are a variety of careers available for a geologist.

From studying volcanoes to glacier deposits, Highline’s geology program explores the science of the earth through a micro lens in the study of minerals, rocks and energy and through a macro lens with the study of earthquakes, landslides and other geologic hazards.

While students could study all this and more through an Associate of Arts transfer degree at Highline, the college is now better able to reach those who are interested in the study of the earth with its new Associate of Science in geology degree.

“What we’re doing now is creating this degree specifically for students that are transferring in geology and it will allow them to take classes specifically needed to major in geology at a four-year school and receive all the benefits of an Associate of Science degree,” said Eric Baer, a geology instructor who has worked at Highline College for 25 years. 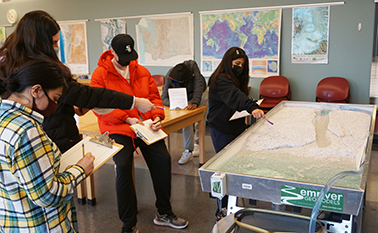 Carla Whittington, a geology instructor who has been at Highline nearly as long as Baer, said students would essentially step into their bachelor’s degree as a junior. Whereas a regular Associate of Arts transfer degree may cause the student to end up with some gaps in their needed prerequisites to complete a bachelor’s degree in geology.

“Several undecided or exploratory students have taken a geology class at Highline and found their interest. They have decided to major in geology,” Whittington said. “And for those people, the AA does work because they already have classes toward their AA, but maybe not what they need to totally be successful in the geology program they’re transferring into.” 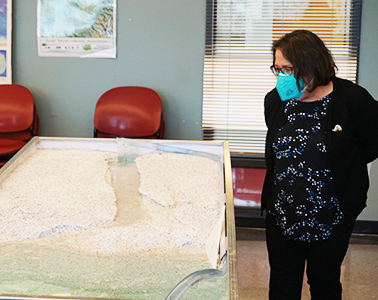 Baer points out that creating an Associate of Science degree in geology will also allow students to see that this is, in fact, a pathway they can study for a viable career.

“One area that is very high paying, that employs a lot of geologists, is the petroleum industry,” he said. “Every gallon of gasoline you put into your car has to be found by a geologist somewhere.”

Baer added that opportunities are endless for geologists in that there are more geologists employed in the United States than there are biologists, according to the Bureau of Labor Statistics’ Occupational Employment and Wage Estimates. Additionally, he says the Washington Occupational Information Service estimates there will be another 1,000 geology job openings in King County throughout the next year.

“Many people don’t realize geologists are the ones in charge of finding safe drinking water –– making sure that it is clean and stays clean,” he said. “There’s this whole field of hydrology, which is a subfield of geology that we do.”

Pre-pandemic, the Geology program often offered field courses that included trips to places like Mount St. Helens, landslide areas around the Puget Sound (Seattle’s Discovery Park), Whidbey Island to learn about glacial deposits and Bainbridge Island to learn about local faults and what could happen during a major earthquake.

“One of the most recent field classes that we developed was ‘Urban Geology’ where students would go to downtown Seattle to learn a little bit about the geology there and look at the building stones,” Whittington said. “In buildings throughout Seattle, there are stones that come from all over the world and locally, so students learn about building stone.”

To help geology students pay for this new degree, the Highline College Foundation will offer a $1,500 scholarship this spring during their scholarship open application period, typically in April.

Those interested in pursuing the Associate of Science in geology should speak with a Geology Pathway advisor.