According to a new study, Highline College creates a significant positive impact on the community and generates a return on investment to students, taxpayers and society as a whole.

The study, conducted by Economic Modeling Specialists International, found that Highline and its students added $631.5 million in income to the King County economy, which is equivalent to supporting 8,675 jobs. 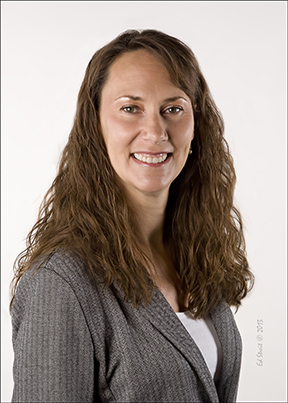 The return on investment was equally telling. For every $1 spent, the study found society gained $9.80 in added taxes and public sector savings, taxpayers gained $4.70 in added state revenue and social savings, and students gained $2.30 in lifetime earnings.

“We’ve always known that education is an investment. Now we have the numbers to back it up,” said Dr. Lisa Skari, Vice President for Institutional Advancement.

“Day after day, we hear personal stories of how education has changed peoples’ lives. It’s gratifying to be able to quantify the impact of education, both to our students and in our region.”

All results reflect student and financial data for fiscal year 2014–15.

Read more about the study and its results below and find links to the full report.

The value of Highline influences both the local economy and the lives of students.

The college serves a range of industries in King County, supports local businesses and benefits society as a whole in Washington from an expanded economy and improved quality of life.

The benefits created by Highline even extend to the state and local government through increased tax revenues and public sector savings.

The purpose of this study is to investigate the economic impacts created by Highline on the business community and the benefits that the college generates in return for the investments made by its key stakeholder groups — students, taxpayers and society. The region the college serves is defined as King County. The following two analyses are presented:

Impacts on the county business community are reported under the Economic Impact Analysis. Results are measured in terms of added income.

The return on investment to students, taxpayers, and society are reported under the Investment Analysis.

Both analyses are described more fully in the following sections. 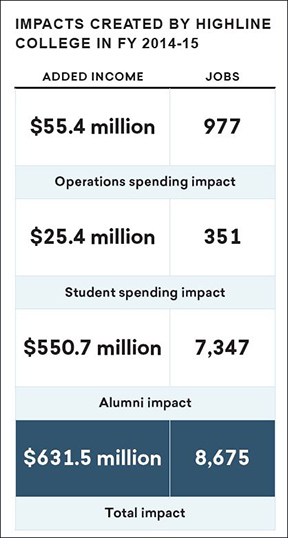 Highline promotes economic growth in King County in a variety of ways. The college is an employer and buyer of goods and services, and the living expenses of international and retained students benefit local businesses. Retained students include those who would have left the county to pursue education elsewhere if Highline did not exist.

The Economic Impact Analysis dissected the college’s operations spending, student spending and the impact of alumni who remain in the region.

Combined, the total impact during the 2014–15 fiscal year was $631.5 million in added income, broken out as follows:

This study considers Highline as an investment from the perspectives of students, taxpayers and society. The backdrop for the analysis is the entire Washington economy.

The study found that for every $1 students invest in Highline in the form of out-of-pocket expenses and forgone time and money, they receive a cumulative of $2.30 in higher future earnings, for an average annual rate of return of 10.9%.

This is an impressive return, especially when compared to the 10-year average 7.2% return to the U.S. stock market.

Return for state and local taxpayers is especially strong. Highline returns more to government budgets than it costs. For every $1 of public money invested in Highline, taxpayers receive a cumulative value of $4.70 over the course of the students’ working lives, for an average annual rate of return of 15.6%.

Society as a whole within Washington benefits from the presence of Highline in two major ways.

The first and largest benefit to society is an increased state economic base from higher student earnings and increased business output.

The second major benefit consists of the savings generated by the improved lifestyles of students. People who attend college typically have a higher quality of life, which generates social savings in areas of health and wellness, crime, and unemployment.

When considered along with the economic impact numbers for students and alumni living and working in the region, the reports shows that for every dollar invested in education at Highline by students, taxpayers or the college itself, an average of $9.80 in benefits will accrue to society in Washington.

The results of this study demonstrate that Highline creates value from multiple perspectives. To summarize, the college accomplishes the following: 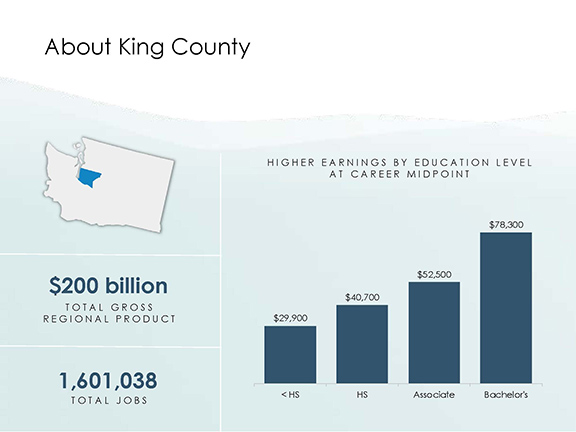 About the Study: Data and assumptions used in the study are based on several sources, including the fiscal year 2014–15 academic and financial reports from the college, industry and employment data from the U.S. Bureau of Labor Statistics and U.S. Census Bureau, outputs of Emsi’s Multi-Regional Social Accounting Matrix model, and a variety of studies and surveys relating education to social behavior. The study applies a conservative methodology and follows standard practice using only the most recognized indicators of investment effectiveness and economic impact. 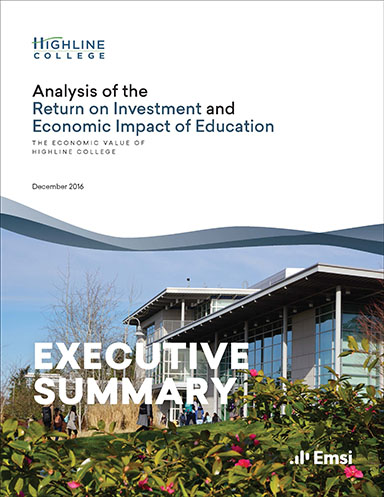 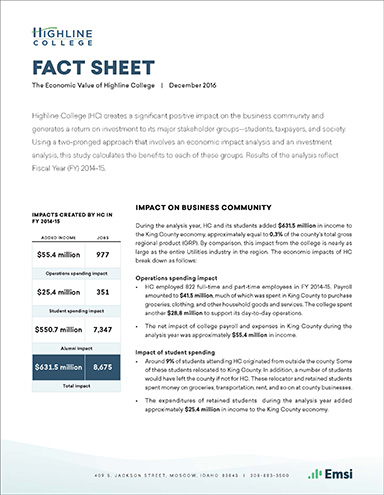 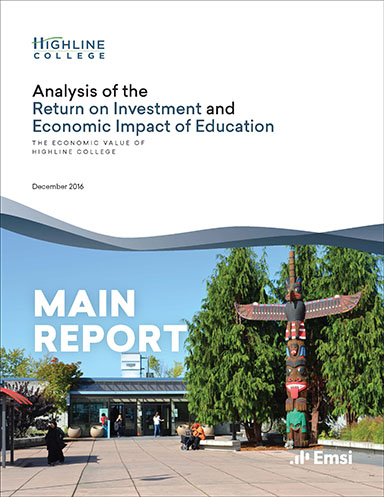 About Us
Highline History
Facts and Information