A Statewide Win for SBDC Client Dan the Sausageman

A Statewide Win for SBDC Client Dan the Sausageman

Thirty years ago, Burien residents met Dan the Sausageman. After three decades as a successful entrepreneur, all of Washington can now call him the state’s Small Business Person of the Year.

Danny House earned the new moniker when the U.S. Small Business Administration named him the Evergreen State’s 2018 winner. He joined other statewide winners at a national event in Washington, D.C., in April to celebrate business people from all 50 states, the District of Columbia, Puerto Rico and Guam.

The annual award recognizes small business owners for their longevity, growth, innovation, perseverance and community involvement. The award was a result of House’s hard work, and some help along the way.

House started selling sausages door-to-door from his home base in Burien back in 1988, using his garage to hold inventory. When he decided to add a retail store in 2004, he stuck to the area and bought a spot in the historic part of the city known as Old Burien. 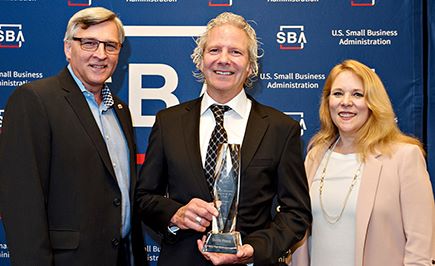 Dan House, center, holds his Small Business Person of the Year award at the April 2018 SBA awards ceremony in Washington, D.C. Flanking House are Rich Shockley and Jennifer Dye, who nominated him for the award, from the Small Business Development Center (SBDC) at Highline College.

Even a successful entrepreneur needs business support from time to time. In 2017, he looked to buy a nearby property to create a distribution center. To do so, he would need a $750,000 loan and some help.

The help would come from two organizations.

At the SBDC, advisers Rich Shockley and Jennifer Dye helped him work through his financial statements and growth projections.

“Between Elizabeth, Rich and Jennifer, I felt I was not going it alone. I had three people fighting for me,” House said in an interview with the Washington SBDC, which is part of national program and hosted by Washington State University.

House qualified for a SBA-guaranteed loan and completed his purchase later that year.

As he works to grow his business, he knows the Highline College SBDC will continue to help him.

“They are everything that you would want when you need advice, are trying to grow your business, or are applying for a loan,” he said.

Since he earned the 2018 SBA award, much has happened, including receiving KeyBank’s “Small Business is Key” award, recognizing House for his impact in the community. The honor came with a $20,000 prize to help renovate a playfield at a local middle school in Burien. (Follow the link to find a moving 3-minute video well worth the time.)

Rich Shockley, too, is impressed with Danny House not only as an entrepreneur, but also as a community-minded citizen who cares deeply about Burien and South King County.

House’s business venues have hosted fundraising events. He has also donated meals, products and cash, all to benefit local foundations and fundraisers.

“It was such an honor to work with and nominate Danny for this award,” says Shockley. “It’s the little things that make a huge difference — building and maintaining customer relationships, being active in your community, and doing the right thing.”

While building his businesses, House has also built up his community, making for a winning combination.

For news from the Sausageman himself, visit Sausage News.