Upon hearing news there was a personal protective equipment shortage from the worldwide COVID-19 pandemic, physics students at Highline College got to work.

With the guidance of physics instructor Aleya Dhanji, four students who are part of the local Highline College chapter of Society of Physics Students began producing face shields using 3D printers on campus.

To date, the physics club has produced more than 150 face shields. With a goal to get the printers working 24 hours, seven days a week, the team expects they’ll soon be producing up to 100 per week. All face shields will be distributed to Highline College chemistry, biology and health care students, who need to be on campus or in hospitals for required clinical hours and practicums.

“I continue to be impressed by students at Highline,” Dhanji said. “Not only are they incredibly smart, but they’re very dedicated in helping the community, very creative. Highline’s biggest asset continues to be its students.”

Former Highline College transfer student Khang Bao, who will attend Central Washington University in the fall, and Sotheara Sen, who graduated from Highline College in June with an associate degree in engineering, both independently came up with the idea at the end of spring quarter. 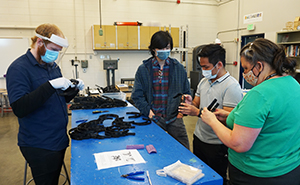 Dhanji had asked the questions: How could physics provide real-world solutions? And, more importantly, how could they help their community?

But Sen, having owned his own 3D printer, had already found an open-source design from Prusa Research and printed a few face shields for the Highline College Bookstore when he worked there in March, before campus closed.

“I was looking at the news and they said the U.S. … the death rate is rising in the medical field. There’s a lack of PPE, personal protective equipment,” said Sen, who plans to study mechanical engineering at the University of Washington this fall. “So, I just came up with this idea. I already own my own 3D printer so I might as well use it to help my community.”

Before Sen and the rest of the physics club could get started, they needed to figure out logistics. Dhanji reached out to Nicki Bly, the director of Highline’s Respiratory Care program, who is also leading the college’s COVID-19 response team. Bly indicated there was a need for more PPE, as Amazon orders were unreliable.

“Even if they got a few samples from Amazon, the quality was inconsistent,” Dhanji said. “We asked how many they needed, and they said 50 would be great. Then she came back and said it was probably more like 300.”

Looking ahead, Dhanji estimates the need is closer to 1,700.

Luckily, the government provided Highline College with about 800 face shields at the beginning of summer quarter, so the team had some time to figure out the best approach for fall.

Because state guidelines prevented students and graduates from coming to campus, Dhanji worked with Public Safety, Human Resources, Career and Student Employment and International Student Programs to hire the current students as student workers and another as a temporary 1,000-hour employee.

Throughout July, Sen wrote code to adapt the face shield designs for three 3D printers, which included one public printer at Highline’s engineering lab, the printer Sen temporarily donated, and a newly purchased printer the college’s grant program invested $450 in. Bao helped by fixing and fine-tuning the 3D printer with various mechanical parts.

Over the summer, the Pure and Applied Sciences department also hired Stephaney Puchalski as an instruction and classroom support technician who also oversees all the science labs. Puchalski then took the lead on getting the project started and keeping it organized.

“Once you have the design and send it to the printer, you need someone to keep checking on the printer, restart the process, check for defects and clean it up,” Dhanji explained. “We need someone going at least one to two times a day. Without Puchalski, this project would not be possible.”

Public Safety paid for the raw materials for face shield production, which includes the spools of plastic that are fed into the printers and melted down before it is printed, layer by layer, into a headpiece design. Then, physics club students came to campus to sanitize the headpieces, and assemble them with clear plastic material used as the shield and a stretchy headband that keeps the face shield in place.

“I’ll be doing most of the work when other people aren’t around to do it,” said Alexander Robins, a current Highline College student who is studying engineering and physics. “So, that will be on Fridays through Sundays, maybe before, and after my other job –– just starting the printers and whatever else.”

Robins, who is vice president and stenographer for the club, said he likes this project because the face shields are needed and it’s something different than his usual projects. After Highline College, he hopes to attend University of Washington to study civil engineering but is also keeping his options open.

The club plans to continue producing face shields throughout fall quarter and possibly into winter quarter. However, their hope is this project they’ve dedicated their summer to soon becomes obsolete, because then it means COVID-19 is finally over.

Learn about our Science, Technology, Engineering & Mathematics degrees and certificates