What started in 2011 with about three dozen young men of color has quickly grown to more than 700 attending a free daylong event at Highline College.

The Black and Brown Summit is geared toward students who are undecided about attending college.

It is one of the few events of its kind in the nation and the only in Western Washington.

Rashad Norris, Highline College’s Director of Community Engagement, said it is a powerful experience for young men of color to see 700 others just like them gathered in the same space.

He said these young men need to feel empowered in order to take control of their lives.

“It’s not that they’re victims, but they’re invisible,” said Norris, who was one of the people instrumental in bringing the summit to Highline and works with a committee to put on the event each year.

After participating in the Black and Brown Summit and meeting college leaders during his first year on campus, Josephus Tolo found new reason to feel hopeful, not only for his future, but for others.

“There are people [here] who care about the younger generation and are trying to create a change, because where we are right now is not where we need to be,” said Tolo, who is in his second year at Highline. “I’m really proud that this Black and Brown Summit was created because it helps enlighten people to the direction they need to go.” 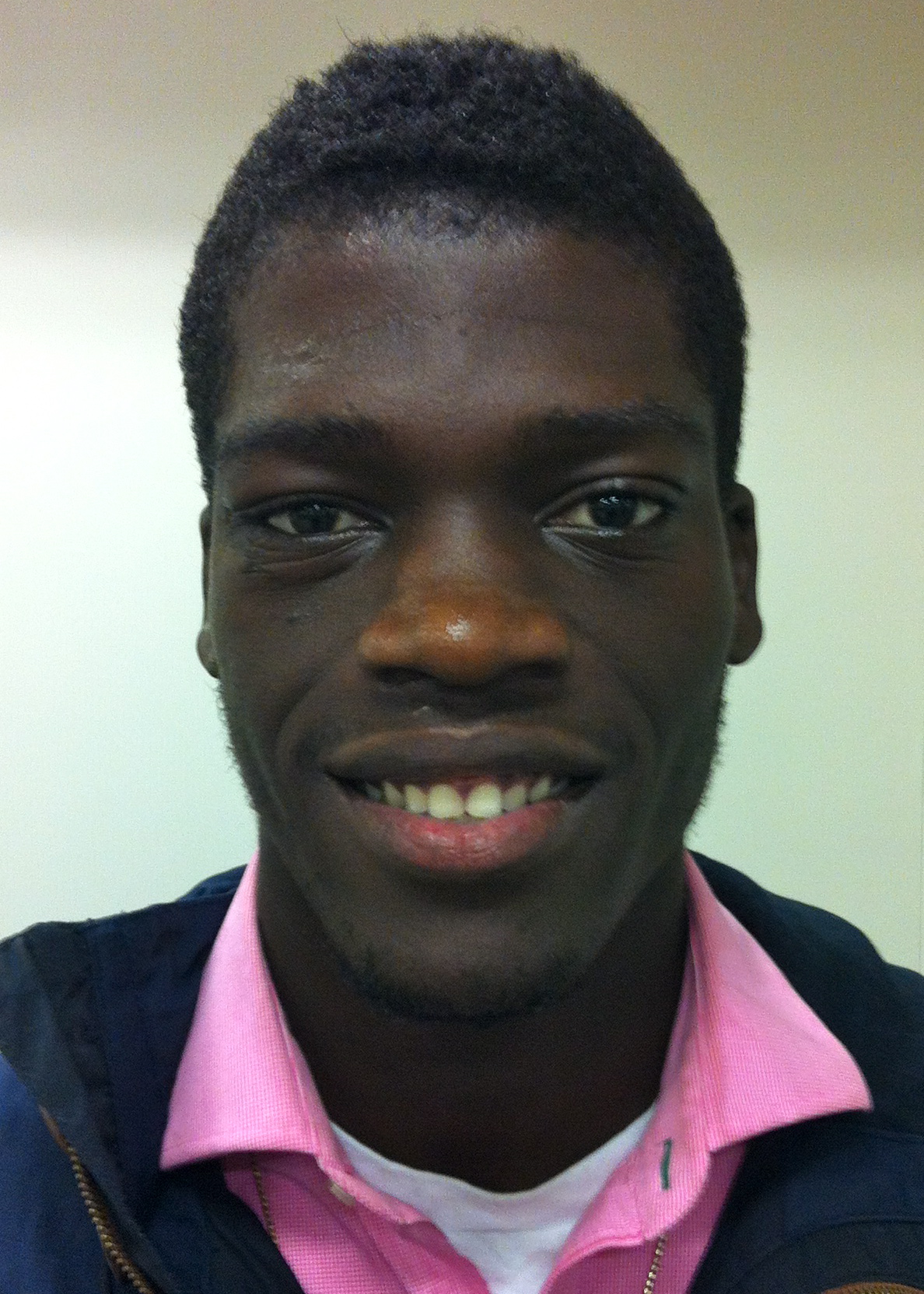 Born in Liberia, Tolo has experienced a lot in his young life. He witnessed war, extreme poverty, and death before moving with his family—including 10 siblings—from Africa to the U.S. when he was 11 years old. He said coming to Highline has changed his life.

“It doesn’t matter where you come from” when you start at Highline, he said, “it matters where you’re going.”

Also in his second year at the college, Christopher Robinson said he did not take high school seriously.

“I definitely didn’t think I was going to college. That wasn’t my personality type,” said Robinson.

But after a couple of low-paying jobs working alongside workers in their fifties who were also making low wages, he decided that he did not want that to be his future. After he enrolled in college, he discovered opportunities he did not imagine would be part of the college experience, such as meeting people who would have such a profound effect on his life.

“Anybody, I’ll tell them to go to college,” said Robinson. “I feel like it’s really important. For those of us who are black and brown, we have to step up our game. We don’t have the luxury to sit back and say, ‘I’ll be OK. I’m going to get this job or that job.’ The scale is not even for us. Statistics show this. It’s unfortunate, but it’s the reality of life, so that means we have to work harder.”

According to the U.S. Bureau of Labor Statistics, the seasonally adjusted unemployment rate in the nation for white males 20 years old and over was 4.1 percent in September 2015. For black or African American males 20 years old and over, it was more than twice the rate, at 8.9 percent. For Hispanic or Latino males over 20, the rate was 5.5 percent. 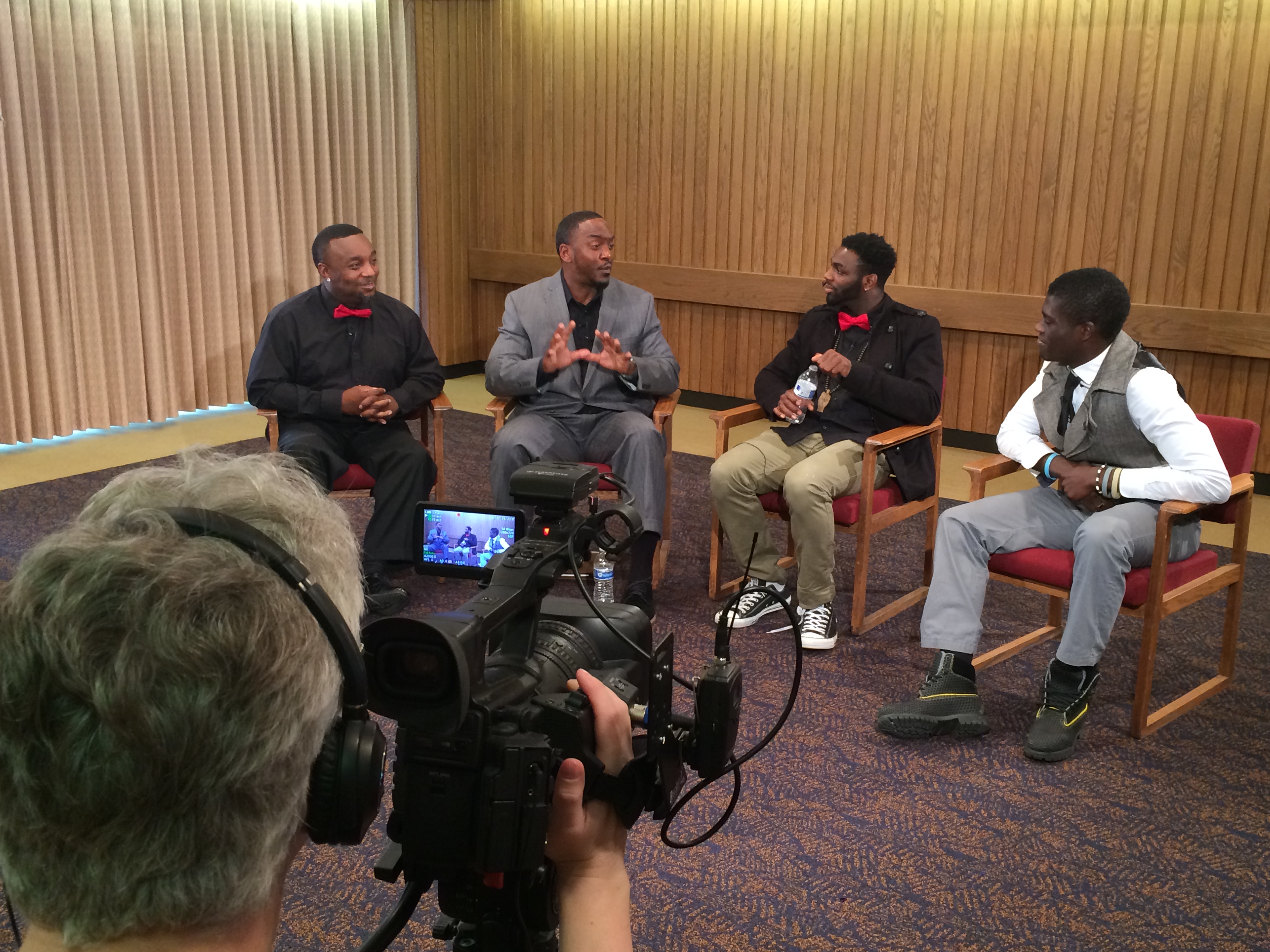 Natorius Ezell, left, Rashad Norris, Christopher Robinson and Josephus Tolo talk about what it is like to be men of color in today’s society. Their discussion was filmed for a video highlighting the upcoming Black and Brown Summit, which will be held November 14 on Highline’s campus.

Those with higher levels of education have much lower unemployment rates, as seen in data from the same time period from the U.S. Bureau of Labor Statistics. For the civilian population 25 years and over with less than a high school diploma, the unemployment rate was 7.9 percent.

The unemployment rate decreases as educational attainment increases: with a high school diploma or equivalent credential, 5.2 percent; with some college or an associate degree, 4.3 percent; and with a bachelor’s degree and higher, 2.5 percent.

During the daylong summit, attendees will choose from more than a dozen workshops, participate in a leadership activity, and enjoy free breakfast and lunch. Sponsors include the Rotary Club of Federal Way, United Way of King County, Highline College Foundation and Highline College Office of the President.

“People always ask me about bringing in a big name presenter,” said Norris. “I tell them that I bring in the big names from our local community, the local men of color who are leading and doing great things. That way, when these kids go out to the grocery store or wherever they are, they will see these men who own their own businesses and work at the local colleges and are leaders and mentors right here. These are the local stars who want to help the young men of color succeed.”

Highline serves the most ethnically and culturally diverse area in the state, which is reflected in its student body that includes nearly 70 percent students of color.

Supporting and addressing challenges facing men of color is one goal of the Black and Brown Summit. Highline actively seeks programs and resources to support its diverse student body. One such program is Umoja Black Scholars, which originated in California and is found in other states, including Arizona. Highline is the first college in Washington to have one.

Umoja (Ooo-moe’-jah), a Kiswahili word meaning unity, is a learning community dedicated to helping African American and other students achieve academic success, grow personally and realize their full potential. Umoja is in its second year on Highline’s campus.

Both Robinson and Tolo were in the first Umoja cohort and will be attending this year’s Black and Brown Summit as volunteers.

“The importance of the Black and Brown Summit is not to get black people better like a treatment or an ointment for our blackness,” Robinson stressed. It is to “give us the power to understand how to deal with racist situations … and get the community involved so that we can radically change the system. I’m not saying that we’re going to change everything, but at least we do it the right way instead of the wrong way.”

He adds that the Black and Brown “gives us the weapons and the tools with education—with a book in the hand—instead of a sword.”

Natorius Ezell, a program assistant in the Umoja program, has attended previous summits and will be helping at this one. He noted that the summit “empowers in a positive way—not a militant one—where kids walk out of there feeling good about themselves.”

One point Ezell often says to those considering college: “College doesn’t tell you what to think, it teaches you how to think.”

Summit Is Simply the Start

Along with the Black and Brown Summit and the Umoja Black Scholars program, Highline supports young men of color through the Minority Male Community College Collaborative (M2C3).

Earlier this year, Highline was the first college in Washington to partner with M2C3, a consortium designed to serve and increase graduation rates of men of color.

Nationwide, only 17 percent of African American men and 15 percent of Latino men earn a certificate or degree or transfer from a community college to a four-year institution in six years, according to M2C3. Highline, through its partnership with M2C3, seeks to change these statistics.

M2C3 is the first research and practice center specifically focused on advancing student success outcomes for men of color in community colleges. Since 2011, M2C3 has partnered with more than 65 community colleges in eight states to support their efforts in addressing challenges facing men of color.