Highline College has earned a prestigious Award of Excellence from the American Association of Community Colleges.

The award recognizes President Jack Bermingham and the college’s five-member Board of Trustees for their exemplary collaboration and working relationship, resulting in effective community college governance.

Highline was one of only seven colleges in the nation awarded at the association’s annual convention. Held in Chicago on April 11, the awards ceremony recognized those colleges that promote economic and social vitality for the community and ongoing commitment to success for students.

“From the perspective of faculty leadership, Dr. Bermingham has created and the trustees have supported a highly effective learning and teaching environment where faculty, staff and students are inspired and enabled to do their best work,” said Ruth Windhover, Ph.D., who is a tenured Highline faculty member and president of the Highline College Education Association, which is the union representing all faculty at the college.

Highline’s board members serve five-year terms and can be reappointed once. The board is composed of community members from the area Highline serves:

“As president at Highline, I know how extraordinarily fortunate I am to share a common vision and commitment with the board and to have their support. We understand that our real success as a college emanates from the faculty and staff’s hard work, innovative initiatives and deep commitment,” said Bermingham.

“I believe that the college thrives on strong relationships, earned trust and positive attitudes. These provide a sense of hope each day that compels us to support our students and communities,” he continued. “I am proud to accept this award because the relationships are authentic, the achievements are shared and the aspirations are genuine at Highline.”

Highline was chosen in part because the CEO/board teamwork and actions reveal their shared vision, mission and goals for the college.

One indicator of their exemplary relationship was revealed during the board’s recent 49-question anonymous self-evaluation. Each member gave a perfect score to a question about the CEO/board relationship, unanimously agreeing that “mutual trust and respect exists between the board and CEO.”

The Exemplary CEO/Board Award is the college’s second AACC Award of Excellence. In 2014, Highline won in the Advancing Diversity category, recognizing it as a leader among the nation’s community colleges for increasing diversity and educational and social justice equity. 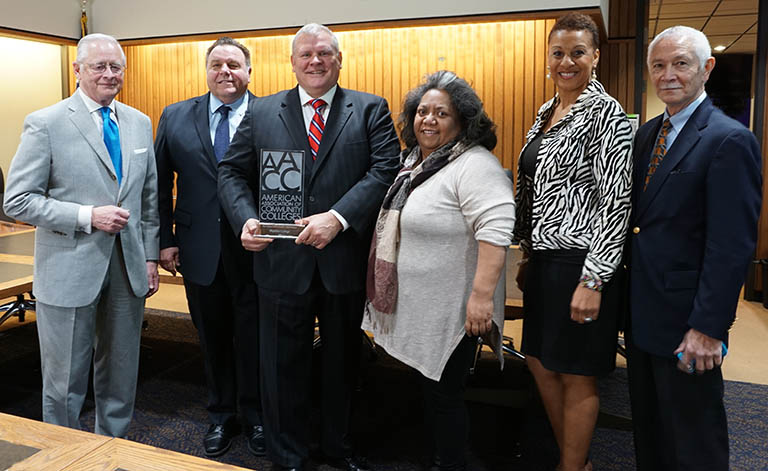