Some college students come to campus for classes, while others attend at the … airport? For those flying in and out of Sea-Tac Airport, the innovative program likely flies under the radar. But for many airport workers, it is the ticket to new opportunities.

Airport workers can be students, too, thanks to Port Jobs’ Airport University program. It gives workers a convenient way to build skills and earn college credits toward certificates and degrees.

Port Jobs used its Oct. 31 anniversary celebration as a way to highlight its workers’ achievements and the partners that made 25 years possible, such as Highline College.

Highline is one of two colleges to offer credit-bearing classes at the airport, allowing workers to skip the commute to its Des Moines campus. For its long-term partnership, Highline was recognized during the event for being an outstanding educational partner.

Josh Gerstman, a Highline vice president, accepted the award on behalf of the college. And fittingly, it was a Highline alumna who presented it to him.

Denise Johnson, a 2015 Highline graduate, began her education at Airport University. She is now a career and education navigator at Port Jobs. 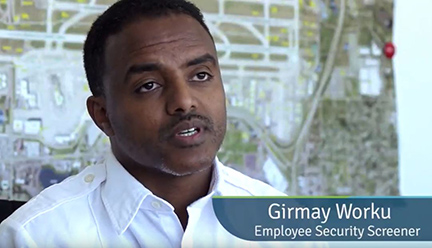 Girmay Worku is one such worker who took advantage of the program in 2017.

When he started at the Port of Seattle as a wheelchair attendant, Worku made $10 an hour. He received a scholarship from Alaska Airlines to pursue the Intro to Homeland Security certificate offered by Highline College at Airport University. Now, he makes $20.37 an hour plus benefits as an employee security screener.

Worku and his fellow Port of Seattle employees have accounted for more than 2,500 enrollments since the program began.

In 2017, close to 90 airport workers were each awarded scholarships between $600 and $800 through the Alaska Airlines scholarship program.

“Think of those scholarship funds from Alaska Airlines. That impact is really amazing,” said Gerstman.

Gerstman noted the other community partners in attendance at the celebration and their contributions to the successful program, including the Center of Excellence for Global Trade and Supply Chain Management and the Small Business Development Center, both located at Highline College.

“[They] are going to continue to be economic drivers in our community and they happen because of you — because of the Port, the municipalities, and the state, federal and corporate partners we have,” Gerstman told the audience.

To learn about career and internship opportunities at Port Jobs, email the Center of Excellence.