Jenn Ngeth’s poem “Self Portrait as Incense During Worship” won first place in Highline College’s 2022 Student Poetry Contest, the 10th one held since its inception in 2012.

The SeaTac resident was one of 96 student writers who submitted 182 poems during the contest, which spanned over the course of winter quarter.

Ngeth, who won the top prize of $200, wrote about religion.

As Ngeth grew up, she was surrounded by Buddhism having been born into a Khmer household. With prayers being sent through incense, ancestral altars and by visiting temples, much of the practice was for cultural and traditional purposes.

“But outside of home, in America, Christianity is the religion most people believe in,” Ngeth said, adding that her grandmother was the only Christian in her family and would often take her to church on Sundays.

“I questioned Christianity a lot. Maybe too much for some, as they told me to pray to God for answers instead,” she said. “The idea/concept of there being only one singular almighty god didn’t make sense to me. I felt it in my core and didn’t believe in the ideologies of Christianity.”

Ngeth said she does see the benefits and beauty religion can bring to some people, and she admires and respects those who have a strong, personal connection to a higher being.

Each year, judges pour through dozens of submissions, looking for one poem that merits a first place in Highline’s annual contest. Here are the winning entries from the past several years:

Yet the hypocrisy of those who misuse religion and judge others left a bad taste in her mouth.
When she was prompted to write an extra credit persona poem during a poetry retreat hosted by faculty member Susan Rich, Kelli Agodon and January Gill O’Neil, feelings of angst, relief and, eventually, satisfaction bubbled up.

“I remember as a kid, other kids around me would talk about how their parents told them they were a gift from God and they believed it,” she said. “I was dumbfounded. I always knew babies came from people having sex, not God. The soul part though –– that’s a different question!”

And, hence, the winning poem was born.

“I hope people understand the importance of having a creative outlet,” Ngeth said. “Honestly, seeing my thoughts/feelings on paper helps me process myself –– moving forward from the past.”

Although Ngeth began at Highline while she was in high school as a Running Start student years ago, she didn’t complete her associate degree before high school graduation.

Between six and seven years later, she returned to Highline during the pandemic and is on her way to finishing her associate degree in Visual Communications. She then hopes to continue at Highline while pursuing a bachelor’s degree in Integrated Design.

“The Poetry Contest committee was unanimous in choosing this poem for first place,” said Deborah Moore, a reference librarian at Highline College and member of the college’s Poetry Contest Committee. “The committee loved how Jenn’s poem is relatable to everyone, the sassiness of the language, and the melding of the sacred and profane.”

Second place, with a prize of $150, went to Burien resident Rosie Pound for “For Kiara and Karly – The Angels over Ballyhoo.” And third place and $100 went to Kent resident William Kuch for “War Memory Lane.”

The contest required students to submit poems that were no more than 20 lines and limited the poet to three submissions. In addition to cash prizes, each student will be celebrated during National Poetry Month in April at an in-person reception and reading on April 28.

The poetry contest’s prize money is sponsored by the Highline College Foundation, and the contest is made possible through support from Print Services, the Communications and Marketing Team, Highline Art & Humanities division, the Highline Library, Highline Bookstore and Center for Leadership and Service.

To read the poems and watch videos of the student poets reading their poems, visit Highline’s National Poetry Month blog. 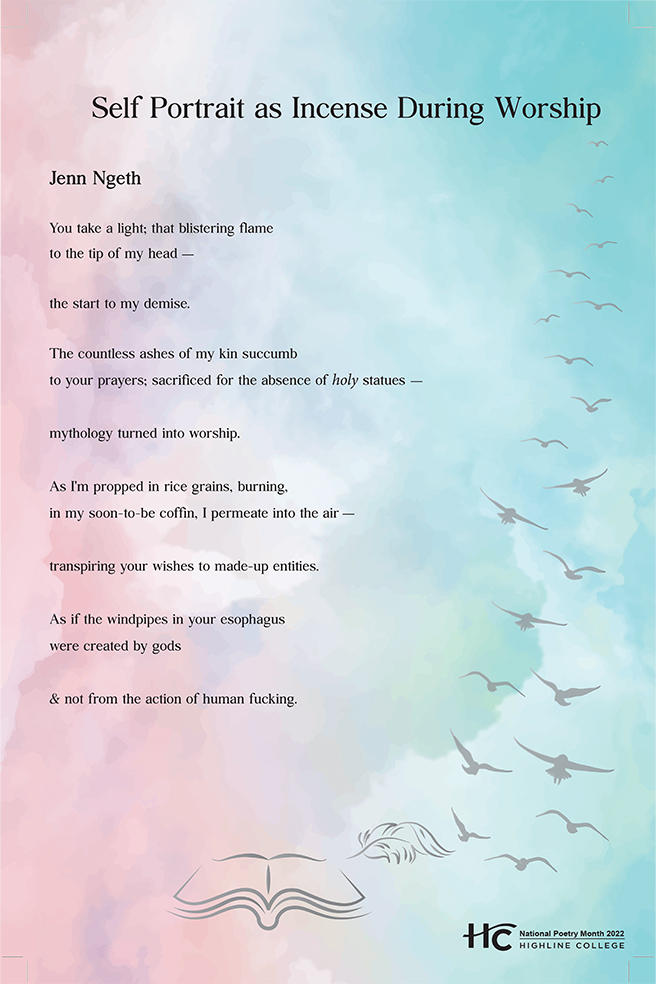 Jenn Ngeth’s winning entry, “Self Portrait as Incense During Worship”

Self Portrait as Incense During Worship

You take a light; that blistering flame
to the tip of my head––

the start to my demise.

The countless ashes of my kin succumb
to your prayers; sacrificed for the absence of holy statues––

As I’m propped in rice grains, burning,
in my soon-to-be coffin; I permeate into the air––

transpiring your wishes to made-up entities.

As if the windpipes in your esophagus
were created by gods

& not from the action of human fucking.