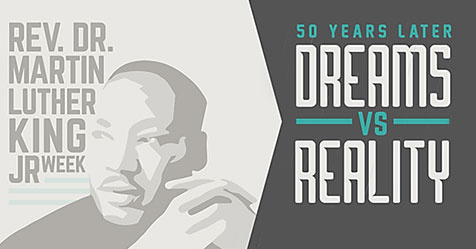 How should we reflect on MLK’s legacy in light of the current social, political, and religious climate in America? Dr. King’s legacy stretches beyond America’s borders and gives hope to people in the struggle for justice worldwide. King truly believed that unity, equality, and love could prevail through nonviolent means, a life passion achieved through the signing of the landmark Civil Rights Act of 1964 by Lyndon B. Johnson under much pressure from King and the Civil Rights Movement.

However, as his message of love and community began to expand beyond the virtues of Christian practice within his own community; addressing issues like the Vietnam war and economic inequality, his life was suspiciously cut short by a supposed “lone shooter.” This King, the radical King, was becoming increasingly conscious that the “Dream” of an America united under one creed was, in actuality, a “Nightmare” with social, racial, class, religious, and political implications.

PK Thompson probes the legacy of Dr. King in his lecture and re-imagines his ministry of the “beloved community” through the lens of radical love King introduced to the world through his campaign of non-violence, but also the radical intellectual he was becoming shortly before his martyrdom. As a person of color, Thompson asks: How would King have defined the “beloved community” in Donald Trump’s America? And how can Dr. King’s message almost 50 years later still provide glimmers of hope for the poor, oppressed, and marginalized people of America and the world?