A 20-year accounting industry veteran has been recognized by Highline College for his work to recruit, retain and advance underrepresented minorities in his profession. The college selected Ed Ramos as this year’s Distinguished Alumnus Award winner.

The award honors former Highline students who have made notable achievements in their profession or community.

Born and raised in Tacoma to parents originally from Puerto Rico, Ramos is a CPA and shareholder with the firm DP&C (formerly Dwyer Pemberton & Coulson). His diversity and inclusion advocacy work began early in his career when he felt out of place as a Latino in the accounting profession. Lacking role models, Ramos couldn’t visualize his future as a partner in a CPA firm.

His outlook changed after attending conferences through the Association of Latino Professionals in Finance and Accounting (ALPFA). His strong belief in the importance of the organization, both for himself and other Latino professionals, prompted him to co-found the Seattle chapter of ALPFA, which serves members in the Puget Sound region.

In 2011, Ramos was selected as the first CPA in the state of Washington — and one of only 33 CPAs in the nation — to attend the American Institute of Certified Public Accountants (AICPA) Leadership Academy. He is also part of a commission created by the AICPA to identify strategies that will increase the retention and advancement of underrepresented minorities in the profession.

A diverse workforce is critical not only for the employees within the profession, but also for the message it sends to clients, Ramos believes.

“Our profession must represent the community that we serve. Without having a diverse profession, we are not providing our clients with the best service,” he says, noting the increase in ethnic and racial diversity in Tacoma and in the region.

Ramos also volunteers in his community as a member and past finance committee chair for Rotary 8 and previously served as treasurer of Centro Latino and Tacoma Community House.

A 1995 Highline graduate, Ramos went on to earn his bachelor’s degree at Eastern Oregon University.

A Quick Read on Running Ramos

A sprinter in high school, Ed Ramos wanted to continue running at the collegiate level and Highline had the type of track program he was looking for. The commute from his home in Tacoma proved to be a challenge, however, when it came to balancing his studies, work and athletics.

Ramos recalls how his track coach, Pat Licari, helped him out: “I used to work night shifts at a warehouse distribution company. It did not make sense for me to go home after work so I would go straight to school and sleep in the car, library or locker room (yes, the locker room, they had a nice sofa in there) until school started. When my coach found out about this, he got me signed up with the work-study program.”

As a work-study student, Ramos worked a bit in Highline’s library. The bulk of his time was working for the Athletics department, helping with concessions during sporting events and cleaning up after games.

When not working behind the scenes at events, he was participating in them.

“My involvement in the team meant a lot. Getting to know and travel with my team created life memories.”

After graduating from Highline in 1995 with an associate degree, Ramos wanted to continue his education and his track career. Following the advice of his track coaches, he enrolled at Eastern Oregon University. 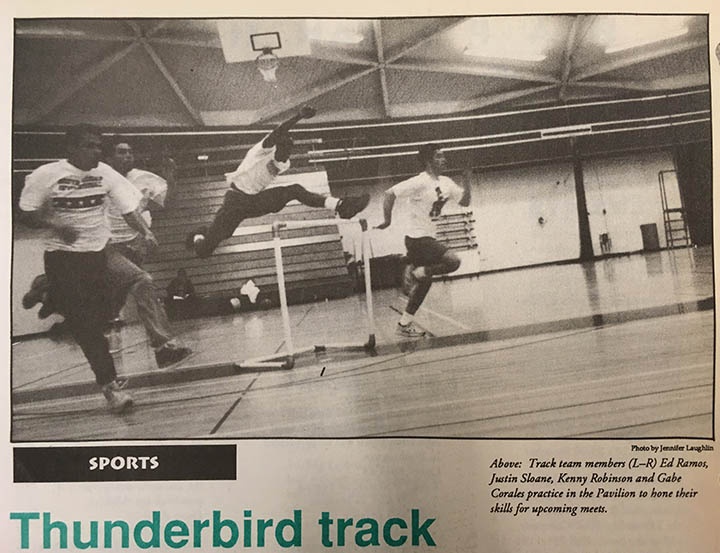 In a photo accompanying an April 1994 article in the Thunderword student newspaper, Ed Ramos, left, is practicing with his track teammates inside Highline’s Pavilion.